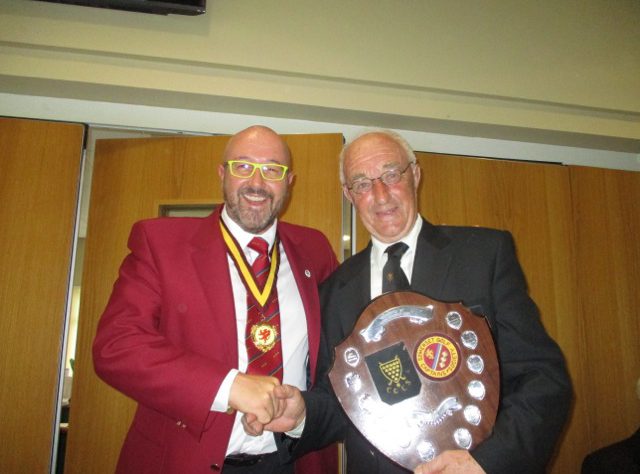 Dark skies at the Mendip Golf Club didn’t affect the enjoyment and good company in the first match of the season between Somerset Golf Captains and Cornwall Golf Captains, played on Monday 16th April 2018.

In match one, Somerset Captain Andy Carter teamed up with  Chris Warcup to take on Cornwall Captain Ross Oliver and his partner Alan Horn. All square after 9, but Somerset slipped to 2 down before recovering to just 1 down at the end. Many jokes and laughter – happy days!

In match two, Somerset Vice-President Bob Acland teamed up with John Chillington, to play against Doug Richards and Laurie Shepard. Standing all square on the 10th, the Cornish boys spoke softly of a “Perranporth” wind – and won the next three holes. Somerset came back to dormy one, but couldn’t take the 18th! Great match; great company; excellent spirit.

In match three, Stuart Mason and Mike Poole played against Roger Hoare and Adrian Roberts. Somerset were one up after 10; two down after 14; dormy 3 down; dormy 2 down; before losing the match 3&1. “They finally ground us down”.

In match 4, Geoff Rooke and Keri Allchurch took on Dave Bundy and Andrew London – what lovely Cornishmen! Golf came a distant second to the company, as Cornwall won the match 1 up to lead 4-0 at this stage!

Match 5 saw Somerset Secretary and local Mendip member Jim Scott team up with Tony Taylor as they played against John Crowson  and Peter Risley. Good company and the game played in an excellent spirit. A 5&4 win brought the first point of the day to Somerset.

In match 6, Malcolm Lloyd partnered Ben Gliddon to take on Colin Mutton and Eric Thomas. This was a game of two halves; with Somerset 3 up after 9, and 1 down after 16! A gentlemanly half was achieved.

In match 7, Roy Schubert and Steve Butterfield played against Colin Beadle and Rick Evans, in a well organised and very friendly atmosphere. Everyone enjoyed it immensely with Somerset running out the winners by 4&3.

Last but not least, match 8 saw Jim Worsley and Mike Stringer play against Peter Jones and Dave Lawton. Great company with generous gimmees and good chipping. However, the rest of the game wasn’t good enough and Cornwall just sneaked the win 6&5!

The overall result ended: Somerset 2½ – Cornwall 5½ ! Congratulations to Cornwall who take the shield back home till next year!