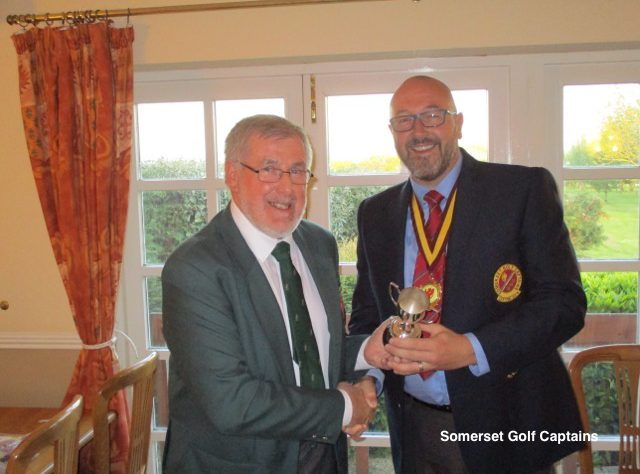 Bright sunny conditions greeted the two teams as Somerset Golf Captains played Gloucestershire Golf Captains at Stockwood Vale Golf Club on Thursday 10 May. The course was in excellent condition, with the greens being particularly quick. Some tricky pin positions made scoring difficult on a number of holes.

In the first match, the Somerset pair of Andy Carter and current Stockwood Vale Captain Simon Waddington were off to a lightening start, being 5 up after 7 holes. But Ian Cornwell and Tony Dunn for Gloucestershire kept their heads and were just 4 down with 4 to play. In fact they made it to the 18th; but finally went down to a half in par 4. Somerset won the first match 1 up.

In match 2, Buill Campbell did what his ‘caddy’ Keri Allchurch told him to do, and it worked! Bill could have had 45 points on his own card, as the Somerset pair beat Trevor Hole and Alan Dick by 4 & 2. Somerset now 2 up.

In match 3, Rich Bartin & Rob Fear were down after the first, but never down in the match again. A chip in on the 3rd, and another on the 14th (as well as few birdies along the way) kept Somerset in the lead as they beat Alan Robinson & Mark Anderson by 3 & 2. Somerset currently looking comfortable at 3-0.

Things changed however in match 4, when Paul Binding and Tony Taylor lost narrowly to Dereck Buttler and Chris Wright 7 & 5 ! One of the Somerset pairings said “I’ve done nothing all day”. His partner felt exactly the same way about his game. A nice day and good company. Somerset now leading 3-1.

Match 5 also went to Gloucestershire, as John Perkins and Mike Newell lost by 4&2 to Clive Fluck and John Dymock. John & Mike felt they had met two great guys and had a lovely day. Shame about their golf but (hey!) – you can’t have everything! Somerset 3 – Gloiucestershire 2 (after 5 games).

In match 6, the game between John Beer & Ben Gliddon for Somerset and Ian Smith and Rex Parry for Gloucestershire was nip’n’tuck all the way round. Each side went up; then down – with Gloucestershire being 1 up at the turn. But Ben used his shot holes well on the back nine, and John played well at times. So Somerset won narrowly 1 up. Match score now Somerset 4 – Gloucestershire 2.

However another defeat for Somerset followed in match 7, where Stephen Butterfield and Malcolm Lloyd lost 6 & 4 to Neil Pirie and Tony Gough. A plethora of birdies and ‘chip-ins’ led to Somerset’s significant downfall. Although Malcolm couldn’t stay for the meal, Stephen and Neil would like to say how much they enjoyed his braised steak and Eton mess! Match score now 4-3 to Somerset – all resting on the last group!

In match 8, Chris Warcup and Rob Ford were playing against Brendan Nunan and David Stowell. A very good game was enjoyed by all parties and the outcome was an honourable draw!

So a vital half a point secured the first victory of the season for Somerset by the narrow margin of 4½ – 3½. Congratulations to all concerned.

Special thanks to Stockwood Vale Golf Club for their excellent hospitality, and well done to Ben Gliddon for his invaluable work as match manager.