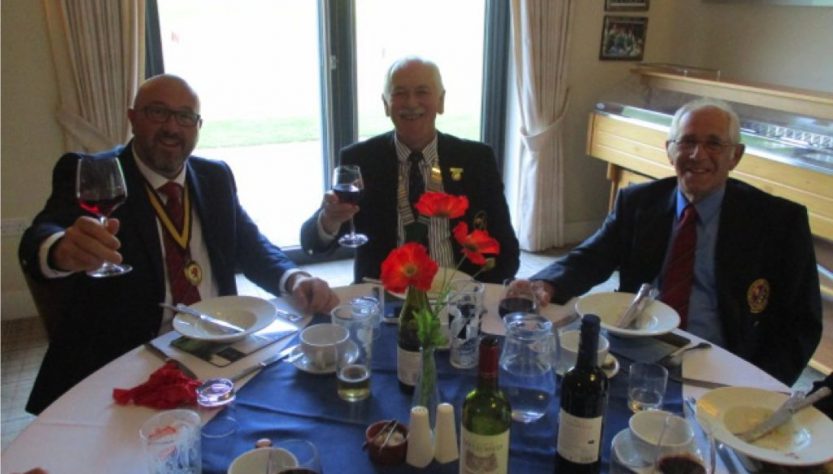 Somerset brought the good weather with them to Hockley Golf Club near Winchester as the match against Hampshire was played in ideal conditions: warm and sunny, with a light wind and a glorious, stunning golf course which everyone enjoyed and would like to play again!

There was no repeat of his famous hole-in-one from yesterday, when Andy Carter joined Colin Davies in match one. This was a superb match, resulting in a 3&2 victory for Somerset. Lovely weather and the course in great condition, Somerset enjoyed the company of Hampshire Captain Howard Brace and club manager Paul Brown.

A very good match followed when Jim Scott and Geoff Rooke took on Mike Kelly and Graham Mole. On an outstanding golf course, Graham used his 11 shots well and putted Somerset out of the game! Hampshire won the game 5&4.

In match three, Murray Parsons and Paul Middleton played against Graham Light and John Aspel. They enjoyed this excellent course in superb conditions (sunshine, light winds etc). Honours were evenly shared on the front nine, but then the Somerset pair ‘clicked’ and went on to win 3&2.

George Davis and Jeff Saunders enjoyed a super day in match four when they took on Tony Cullen and Brian Mortimer. Good golf played in great company on a lovely course. “Hope to play here again in the future”. Another win for Hampshire, however, this time by 4&3.

In match five, John Beer and Rob Ford thoroughly enjoyed their game on a great course, in the good company of Danny Francis and Barry Jones. The game was evenly contested with Somerset one up after 12; but then Somerset went on to win 4&3. The team card recorded 4 birdies, 7 pars and 7 bogies for Somerset (3 over gross).

However in match six, Chris Warcup and Rob Hardy were beaten by the excellent pairing of Brian Homerson and Neil Dalton. But what a lovely course which we would love to play again. All down to the last match with Somerset leading 4-3.

Roy Parmiter and Stuart Mann were playing against Bert Keefe & Ray Barlow in the final and deciding match. The Somerset boys were down early but made a fight back before eventually losing 1 down on the 18th. Very good company and banter from all concerned.

The overall result was a draw 4-4, which meant that Somerset retained the trophy, which they had won by beating Hampshire in the previous year.

Special thanks must go to Somerset match manager George Davis for his superb organisation and efficiency – much appreciated by everyone who enjoyed this memorable and historic mini-tour.