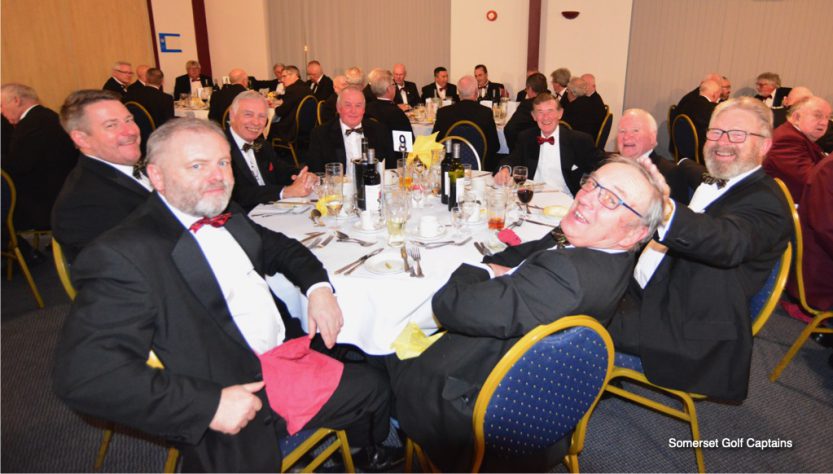 The 58th Somerset Golf Captains Anniversary Dinner took place on Friday 7th February. The dinner is always one of the  highlights of the season, and this years event was no exception.

Over 180 captains and their guests convened at Taunton Rugby Club on Thursday to enjoy an evening of friendship. good company, excellent food and plenty of drink. All of this superbly orchestrated by the toastmaster, Chris Hocking.

The evening started with immediate past captain Andy Carter from Stockwood Vale, inviting guest to stand whilst he said grace before the meal. Typical of Andy, he found a particularly appropriate set of words to get the evening off to a great start.

The President of Somerset Golf Captains, Mike Usher-Clark, then welcomed everyone to the dinner and thanked the committee for their hard work during the year – especially Captain Elect Stephen Butterfield in his role as Dinner Organiser. Mike also welcomed the new captains present, who had recently, or were about to, take up their positions in the golf clubs. Mike then proposed the loyal toast to her Majesty “The Queen”.

The captains and their guests then enjoyed a delicious five course meal which was served efficiently and in good humour by the attentive staff from Taunton Rugby Club.

After a short break the President of the Somerset Golf Union, Geoff Ogden spoke about the camaraderie which was evident in the room and proposed the toast to “Somerset Golf Captains”.

And then it was the turn of Captain of Captains John Beer to respond and to review the golfing season 2019. He also thanked the committee and match managers, and then paid tribute to Jim Scott who has announced that he intended to stand down as secretary at the AGM. John confirmed that Somerset had played 16 matches last year: winning nine losing five and two resulting in halves; (56% win ratio). He also thanked the golf clubs for extending courtesy to allow us to complete our matches each year. John confirmed that the online registration worked well last year with 589 registrations and 94 captains representing Somerset. Match reports and photos were usually published within 48 hours. During the winter the website has been restructured and we have added the historical records of matches against other counties. Finally John announced the launch of a new “Somerset Golf Captains” Facebook page and a new Twitter account to allow better communication with members and clubs. John mentioned the disappointments of rain leading to the cancellation of the Midlands tour, and to losing to 8-0 against Cornwall (although Sussex reversed that result later in the season). Because we won more matches than we lost, our engraving costs have gone up! John also invited captains to think about their absent friends. In terms of highpoints, John mentioned the Six Counties competition at Saunton, where we came third; a hole-in-one by the South Wales Captain John Linton at Enmore (on the 12th); the ongoing support from the past presidents Ken Hinchliffe, Trevor Jenkins, and George Davis. John will remember the season for the banter and sportsmanship and the fun, and used his response to give examples of each of these special memories. In conclusion John stressed that it’s not all winning: it is about playing this great game of golf; on great courses; and in good company; and thanked our guests for their friendship. their hospitality and their generosity.  And then he proposed the toast to “The Guests”.

The evening concluded with the response to this toast. Everyone really enjoyed a very witty and entertaining performance by our guest speaker the comedian Mike Lewis. The laughter in the room paid testimony to the spirit of camaraderie in Somerset Golf Captains. Indeed after the event Mike emailed the society to say how much he had enjoyed the evening: “It was a delightfully friendly gathering and I enjoyed myself immensely, particularly the banter with you and ‘The Boys’.

President Mike Usher-Clark said “A big thank you to everyone for their inputs to a very successful dinner last night.Of course the biggest thank you and well done goes to Stephen from myself and I am sure all of us for being the mastermind and driving force of the event. It was fascinating to hear the view of Geoff Ogden the SGU President as to how impressed he was with what we do and who we are.”

Finally, many thanks to Chris Warcup for his superb photographs