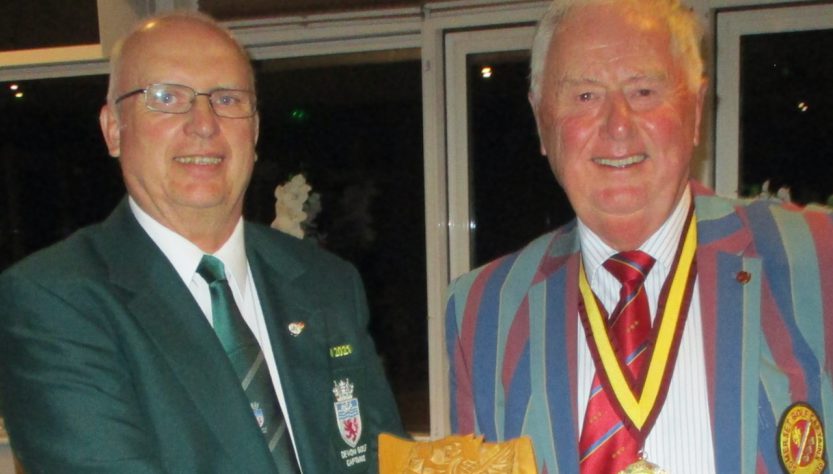 The weather was overcast with some sea breezes when Somerset Golf Captains travelled to Teignmouth Golf Club to play against the Devonshire Golf Captains on the 2nd of September 2021.

In match one, Stephen Butterfield and Keri Allchurch played against Devon Captain Graham Heaman and Peter English. This match was all square through 10 holes, but the Somerset putters were cold which prevented any improvement. Six shots to the home captain didn’t help;  and Somerset lost by the margin of 3&2.

In match two, Mike Usher-Clark and Mark Moorfoot played against Malcolm Jordan and Neil Hayman. This was a great game with lots of nature walking in the course and heather. Mark was the Somerset anchor and Mike popped in when needed to win by the margin of 4&3.

In match three, Paul Middleton and James Boyce played against David Barker and Trevor Tape. This was an excellent match keenly fought and balanced until the final holes which sealed the win for Somerset.

In match four, Murray Parsons and Max Putnam played against David Grieve and Terry Membery. Somerset did their best to lose…but somehow the gentleman of Devon gave some long putts to halve most holes and the match finished all square.

In match  five, John Whitewood and Mike Rossiter played against John Bailey and David Jack. The Somerset pair were one down at the turn and then Devon opened up a three hole lead to win the match 3&2.

In match six, Phil Barrett and David Andow played against Mike Pennington and Peter Dunstan. The Somerset boys had a fast start and were two up very quickly but the Devon pair fought back to square this very good match.

In match seven Rob Fear and Rob Ford played against Val Richards and Mike Badcock. Much confusion on the shots until the home players realised they were using the ladies card! Rob Ford mastered the par-3’s which were the backbone for a Somerset win by the margin of 5&4.

In match eight Roy Parmiter and Michael Bovingdon played against Terry Thorne and Ian Bulpin. This is a very nice course and Terry and Ian were good company. Mike and Roy had their work cut out and lost by being one down after 18 holes.

And so the overall result was that the match was halved with Somerset 4 and  Devon 4.

We would like to thank match manager Rob Ford for all of his hard work and organisation.