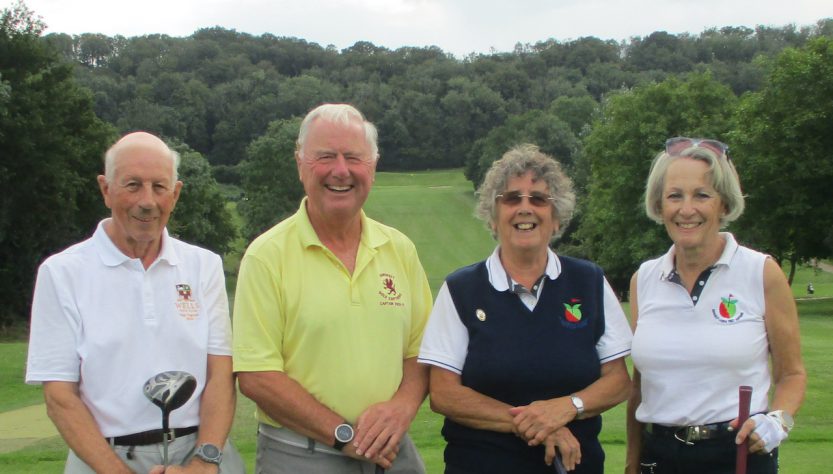 Fine weather welcomed both teams to Wells Golf Club on Wednesday, the 8th of September when Somerset Golf Captains played their annual match against the Somerset Ladies Past Captains Association.

Both teams wished a speedy recovery to the Ladies Chairman Sandra Ford who has recently been unwell and Claire Biggs captained the side in her absence.

In match one, Stephen Butterfield and Geoff Spinks played against Claire Biggs and Susie Gibbons. The Somerset captains were putted off the golf course by two very steady ladies! Birdies were needed for a half! Pars were unlikely to achieve any reward! But great fun and well played to the ladies who ran out winners by the margin of 3&2.

In match two, Bob Acland and Chris Reed played against Leslie Wills and Sue Freesher. Bob and Chris had a flying start-then came the crash when Sue holed a 90 yard chip, and Leslie followed it up with some excellent driving. Sue continued to hole everything in sight and Leslie never wavered. Great company and too good on the day to secure a victory by the margin of 3&2.

In match three, Rob Ford and Marcus Woodward played against Di Yates and Ros Gait. This was a very close game with 12 holes halved and the match ended up all square on the 18th. Di and Ros played very well. Great company and played in good spirit.

In match four,  Andy Carter and Mike Snaith played against Sally Dymock and Elaine Morgan. A superb day of golf on a great course with exceptional company. Mike went off like a rocket, not just with his own golf, but the usual boy-like banter and Andy followed in his trail. Lovely company  – a fixture enjoyed every year. Somerset one by 6&4.

In match five,  Chris Warcup and Nigel Haigh played against Eliza Vail and Carol Nowers. This was a lovely day and Chris had a great partner in Nigel. Always great to play in this match with Somerset Golf Captains winning by 2&1.

In match six, Mike Usher-Clark and Ian Suttle played against Cathy Shepherd and Jane Morton. An unusual format and two lovely ladies to challenge. Two foot puttts were conceded and the ladies won (of course) by being one up.

In match seven, Roy Parmiter and Tim Nicholls played against Sue Chambers and Gwen Cavill. This was a lovely day played in great spirit. A tough match with everybody contributing but the men just edged it by the margin of 4&2.

In match eight, John Beer and Jeff Saunders played against Linda Johnson and Donna Adey. This was an unusual match with Somerset Golf Captains going four up – before the ladies past captains staged a remarkable recovery and the match was all square after 12. Nip and tuck after that until Jeff had a shot on 13 and the match finally finished on the 17 with the Somerset Golf Captains winning by 2&1.

So the result of the match was Somerset Golf Captains 4 1/2 Somerset ladies past captains Association 3 1/2.

Whilst bingo was being held in the main bar, both teams enjoyed a delicious two course meal followed by entertaining speeches.