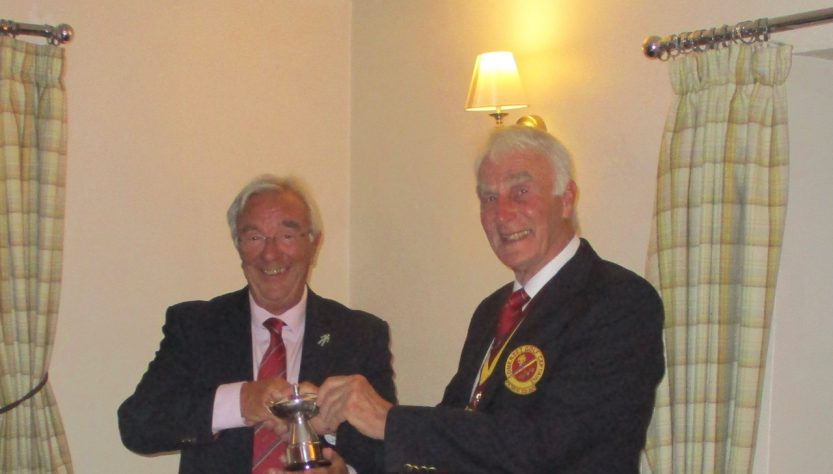 Warm sunshine and a gentle breeze inspired confidence. The course was in excellent condition and the 11 past Captain of Captains teed off with expectations high.

Past President George Davis was the holder and pre match favourite (a 7 times winner) but the young thrusters, Carter and Parmiter and Beer were determined to challenge his dominance.

In the event it was past President Mike Usher-Clark who provided the early challenge; but his score of 38 points was topped by an excellent 40 carded by Iain Robertson. Iain was presented with the trophy by President Bob Acland at a post-event dinner.

A bowmaker competition held simultaneously was won by the team of Roy Parmiter, Andy Carter, John Beer and Iain Robertson ,who were presented with bottles of wine.

The Past Captains were joined by Frank Ryan for dinner and all enjoyed an excellent meal with much banter.  Frank, a non-playing member of the Presidents Bowmaker team, was awarded a notional 36 points. Frank, in absentia, figured on the back nine, narrowly missing out on a team prize!

The Captains present acknowledged the contribution to the association of Past Captain of Captains Terry Glossop (The Mendip) who passed in the previous week.

The President thanked all for participating and the captains expressed their appreciation to the Mendip Spring catering and ground staff for the organisation of the day.