Home>News>Sun shines on Somerset and Surrey 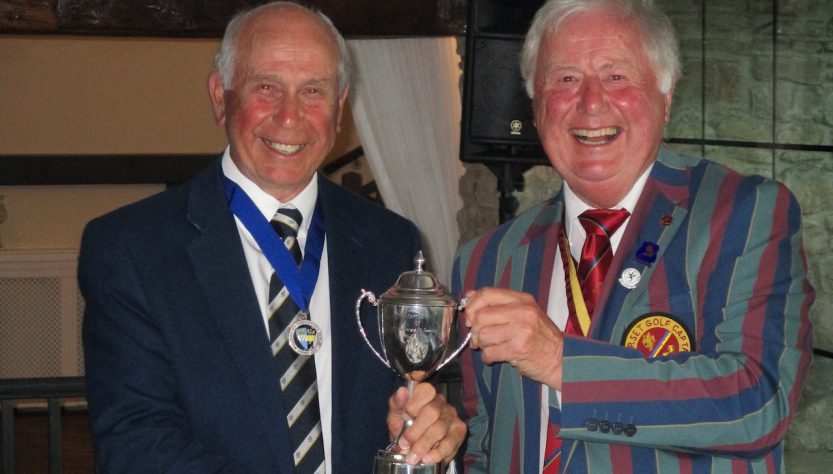 The sun was shining and the temperature was rising when past captains from  Somerset and Surrey met at Mendip Springs Golf Club on Tuesday the 1st of June 2021 – almost exactly a year later than the original date set in 2020 before being postponed due to COVID19.

The Surrey team stayed in the accommodation at Mendip Springs Golf Club and were very complimentary about the hospitality and the service they received during her visit.

Captain of Captains Stephen Butterfield led off in match one playing with President Bob Acland. Bob was hot on the front nine and Stephen moved from chilled to superhot on the back nine. It was a good combination against a Surrey pair who were a pleasure to play and whose company was particularly enjoyable. A great game and excellent company resulting in a win by 6&4 for Somerset.

In match two,  club captain Nick Patel played with Colin Davies and secured another win by 2&1. What great company those Surrey guys were again!  They rose to the match as time went on.

In match three, Tim Wheeler and Phil Barrett lost to a very useful Surrey team: one of whom started with a birdie, and the other finished with a birdie. Surrey coming out as winners with a margin of 5&4.

In match four, Jeff Saunders and Tony Taylor also won by 4&3. Tony felt he had to apologise for Jeff‘s handicap – but the Somerset players enjoyed a wonderful game with friendly opponents played in just the right spirit.

In match five, Keri Allchurch and Glyn Sewell enjoyed the wonderful company of the Surrey players both on and off the course. This was a scrappy match which Somerset just edged by a margin of 2&1, but definitely new friendships were made.

In match six,  Mike Usher-Clark and Jim Allan played against Eddie Wheeler and Dave Yabsley. Jim was amazingly accurate and hit the powerlines three times but the 27 handicapper from Surrey (Dave) had a par on all the par-3’s and also a net 1!  A great game with Surrey the worthy winners by 5&4.

In match seven, Vice-President Roy Parmiter played with Mike Snaith who had a great game against the Sloane Ranger (Nigel) and his partner Tonto (Steve). A great game played in good order on a great course with good company with Somerset eventually winning 1 up.

In match eight,  Mike Rossiter and match manager David Bate also secured a win by 3&2 against Mike Weaver and Brian Hooper. Due to a late start (because Mike forgot about the game!!) a very understanding bunch welcomed Mike to the tee with open arms. This was a great game which Somerset managed to win although there appeared to be too much water and too many trees for our guests from Surrey who were a lovely bunch. Mike wishes to record his apologies for being late.

The final result was a resounding win for Somerset with the margin of 6 to 2; and so the trophy stayed in Somerset for another year.

After the match both teams enjoyed a wonderful meal and great hospitality from Mendip Springs Golf Club. We later received this email from Surrey:

“On behalf of the Surrey Golf Captains, many thanks indeed for hosting us so well at Mendip Spring. We all had a thoroughly enjoyable time, in a venue that was perfect for such a visit. We are of course smarting from yet another defeat, but it was tempered by the great company, and beautiful weather.  Thanks also for your help in organising the event.  We shall look forward to next year, when expectations will be high for a Surrey resurgence. “

“Dear Scott. Many thanks indeed on behalf of the Surrey Golf Captains for the really wonderful time we spent at Mendip Spring.  It was an exceptional experience, particularly during these Covid times. You, and all your staff went beyond the call of duty to make it such an enjoyable and completely hassle free stay. The venue was perfect for us, and of course the sun shone.  We also thoroughly enjoyed the course, even though we lost the match. Please extend our thanks to all. Kind regards”

We would like to thank the match manager David Bate for his organisation and liaison with Mendip Springs.