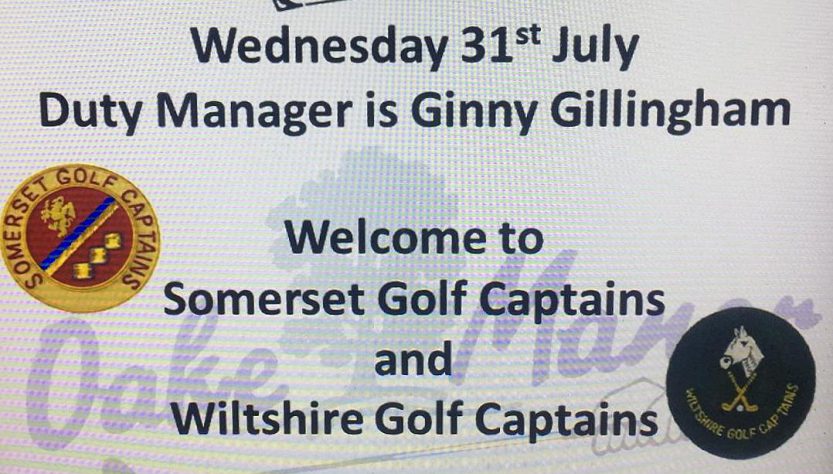 Everything happened as it should – the golfing gods even smiling upon Somerset.

Oake Manor is a great hosting facility, where Somerset held the 2019 Spring meeting, and it did Somerset proud in every department.

The course had benefited from recent rain and was both picturesque and a good test of golf, with its variety of holes and just enough water to make golfers be very careful in places.

The catering in the clubhouse was restaurant class  for both Lunch and Dinner – thank you Oake Manor.

As usual the Skippers went out first. Somerset Skipper John Beer (wearing his lucky flat cap in which he has not lost) was partnered with Oake Captain, Mike How to take on Wilts Skipper Pat Blake and his partner Ian Vincent. Now with two local members out together, the Wiltshire players tried very hard but the inevitable happened and it was a win for Somerset 5/4

Erica Klim and David Fife went out next for Somerset against Ian Lund and Richard Allen of Wiltshire. Once negotiations for handicap for Erica were complete the game took off and after great fun, ended with a very honorable halved match.

Denis Compton and Keri Allchurch took to the tee next  for Somerset and found themselves facing David Ruffet and Ian Mitchell from Wiltshire. Their match report comments upon Denis’s trying very hard, but this was no avail as Wilts won this game 2/1 in a close finish.

Colin Mantle and Steve Rowlands were the next Somerset pair and took on Dick Solomon and John Charles of Wiltshire. This was a close game and was settled on the 18th hole, with the result that it was a 2 up win for Somerset.

Bob Smith and Colin Warnes came out next for Somerset and took on Phillip Harris and Steve Dumbleton of Wiltshire. Phillip and Steve got an early lead and maintained it to the end, winning 2/1. It was a very good round for Steve as he also won the nearest the pin for the visitors,coming quite close to a long stay at the bar!

Past SGC Secretary Rob Ford and Rob Hirons were the sixth pair and were matched against Roger Entwistle and Ian Pearson of Wilts. Wilts won this game 2 up and apparently one of the Wilts boys did most of the damage, but no one would say which one it was.

Somerset were now trailing so Phil Barrett and Ben Gliddon needed a win for Somerset against Andy Hatter and Barrie Reardon-Smith of Wilts. It seems Phil conjured magic with his new driver and this resulted in a win for Somerset 1 up.

Somerset’s last pair were Murray Parsons and President Mike Usher-Clark. They had a superb game with Dave Clutson and Clive Robinson from Wiltshire. Good golf, competitive but friendly all the way around. However the Somerset steadily built the unassailable lead that gave them a 5/3 win and Somerset the overall win by 4.5 to 3.5.

The trophy for this match is actually two items and past Somerset President, Ken Hinchlife, could fill in the missing details.

Following an appeal from a Somerset President of the past for a trophy for each match, a “gold” tie pin was presented by Dermot McHugh,  a past Taunton and Pickeridge Captain. It is handed to the winning team to be worn at the annual challenge by the Captain of the team who hold the trophy.

Additionally there is a wood plaque and  record of the match is added to the trophy after each encounter with a ball marker from the venue of the match. These details make up just some of the long history of the matches play against the Captains of other Counties.

After a lovely meal the two Skippers both made elegant speeches and presented the nearest the pin prizes.

Finally it was time for the formality of the Trophy handover, and Skipper Pat of Wiltshire is pictured handing the trophy to Skipper John of Somerset, who maintains a run of wins.