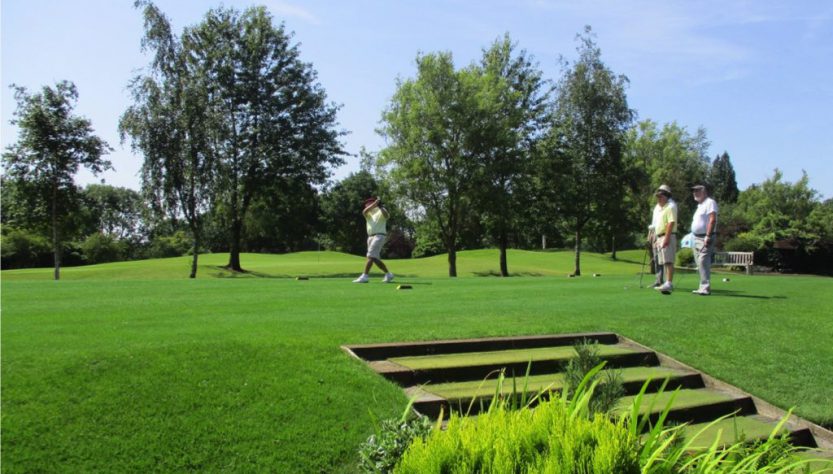 We usually get a warm welcome when we play against the South West Region Golf Club Managers Association – but this wasn’t just warm it was scorching! In fact, the hottest day of the year greeted the Somerset Golf Captains team when they arrived at Henbury Golf Club on Tuesday, the 23rd of July. Temperatures in the middle of the afternoon reached 30-32 degress! And some of the Somerset players really struggled in this heat….

In match one,  Captain John Beer and old friend Phil King played against Ian Griffiths and Peter Jones. The challenging course was in great condition in glorious weather. After going two down after two holes, a fighting recovery led to the match being all square after nine. A strong finish allowed Somerset Golf Captains to run out winners by the margin of 3&1. The card shows that Phil scored eight pars playing off a handicap of 15!!

In match two, Pete Amos and Rob Ford played against Paul Heyburn and Malcolm Wilkinson. The Somerset players found this to be an excellent golf course in first class condition. Unfortunately, Rob struggled with the heat and retired after 9 holes. Pete felt it was a pity his partner Rob only managed to complete part of the course (due to the effects of the heat) but everybody was pleased to see Rob recover afterwards and join us for dinner. Pete was two up with two to play, but had to concede a shot on the par 3 17thand drove into the trees on the 18th. A very creditable half under the circumstances.

In match three, Steve Taylor and Mike Newell played against Alan Creber and Bob Knight. This was a great course in excellent condition played in very good company with Bob and Alan. A great win for Somerset captains 4&3.

In match four, the Long Sutton pairing of  Rich Bartin and Mike Poole played against Michael Penlington and John Mills. Somerset recovered from being three down to all square after nine, but couldn’t hold on and eventually lost 3&2. Very impressive clubhouse and tee preparations; everyone had a good friendly match.

In match five, David Fife and match manager David Andow played against Michael Wake and Bob Clark. This was a close game but great fun. The managers enjoyed some good fortunate bounces as their golf balls found their way from the trees on to the fairways.  A half was a fair result for both teams. Unfortunately, the heat got the better of David after his shower and for a period of time he felt very faint. Thanks to his playing partner David Fife for sitting with him, and to  the Worlebury pairing of Steve Taylor and Steve Rowlands who kindly took responsibility for getting David back to Weston without his having to drive.

In match six, Steve Rowlands and Glyn Sewell played against David Weston and Robert East. Somerset got off to a slow start but clawed their way back and the match was close until the last few holes. Enjoyable company and the course was in good condition and very sunny. Somerset won this match by 3&1.

And so after all six matches, the result was a victory for Somerset Golf Captains by 4 points to 2. Somerset retain the trophy they won last year, and improved the overall results to Somerset 12, Managers 10, halves four!.

Everyone was looking forward to a cold shower after the scorching heat wave; and lots of water and soft drinks to help people rehydrate. Given the heat, both Captains agreed that ties and jackets were to be optional.

In reply, John Beer thanked the Golf Club Managers Association for their warm welcome – definitely the warmest, hottest welcome (and match) of the season so far. John echoed the compliments with regard to the condition of the course and the excellent catering and bar services. Ian then presented John with the trophy for Somerset to retain and engrave!.

We would like to thank our match manager David Andow for his excellent organisation of the team and the fixture.