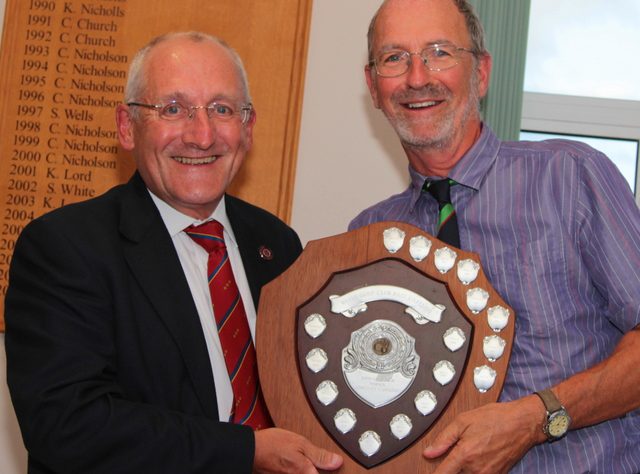 The game between Wells GC Captains and Somerset Captains has a unique pedigree in that most of the Wells players are members of SGC. It has a special atmosphere, a mixture of kinship and rivalry. It is a match looked forward to and places for this fixture are particularly sought after.

The weather for the day remained warm, with a gentle breeze, and Wells a scenic course was green and mostly lush after the recent downpours.

The skip for the day for SGC was John Beer, Captain Elect and with him was Mike Rossiter. They found themselves paired off with George Davis and Erica Klim for WGC.

There was a view that the game was lost on the first tee when Erica negotiated her “allowances”. Despite valiant efforts by the SGC pair, the match report says the better woman won. WGC won 1 up

The SGC boys were 3 up after 3, Rob playing very well. Then local knowledge and John’s shots began to tell and the game reached the 18th tee all square. However Mike managed to win the last hole against shots and this gave SGC a balancing win , one up.

For SGC, Roger Magor and Tim Nichols were next out and took on Derek Biggs and Mike McGrath for WGC. The match report is very clear that this was a very close game, which the Wells boys won 6/5!

Steve Butterfield partnered Ben Gliddon as the next SGC pair. They were matched aginst Rob Swift and Colin Mantle for WGC. This game was described as very, very close and contained some par golf from Steve. In the end the SGC boys had their noses past the post first with a win, one up.

The overall is now 2 wins each.

Paul Hucker and Trevor Watts went to the tee box for SGC and matched up to Malcolm Terry and Mike Stringer for WGC. This match was a humdinger. There were only three halved holes up to the 17th when the boys from Wells won  by 2/1.

Chris Warcup and John Paterson for SGC then faced up to Phil Slater and Geoff Eade of WGC. The report remarks on the enjoyment of the afternoon which compensated for the “slaughter” of the SGC boys, eventually by 3/2.

For SGC, Treasurer David Andow and past Secretary Mike Nash, found themselves faced by the two Steves of WGC, Steve Rowse and Steve Bocquet. Apparently the Steves were on top form and climaxed their 4/3 win with a birdie.

Match Manager Bob Acland and Keri Allchurch went out as the last SGC pair and took on Andy Williams and Bob Hinderford for WGC. In this game it seems, some times, birdies were not good enough, and the SGC pair were pipped at the post with a win for WGC one up.

So over all a very convincing win, 6/2 for the Wells team, which meant they retained the trophy; which at first they did not know they had.

That of course matters not at all, as the after match joviality was superb and this was reflected in the two Captains’ speeches and toasts to the opposing team.

John Beer, at the end of his speech, proved what a modern man he is with a brilliant and relaxed rendering of “blonde man” jokes, which capped the evening off so well.