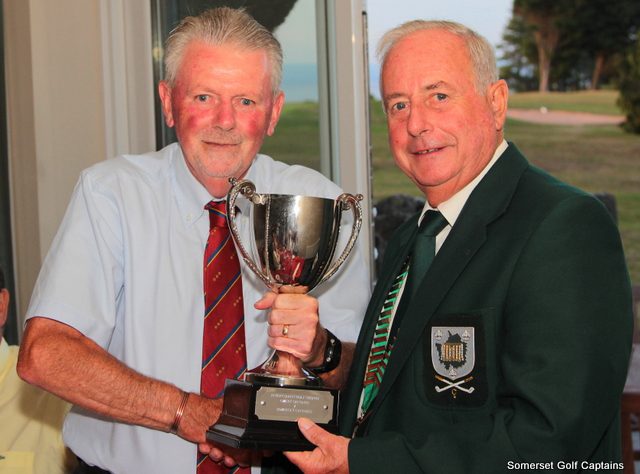 The gentlemen from Gwent visited Clevedon Golf Club for the annual encounter on the 6th August, 2018. The day was hot and sunny with just enough coastal breeze to make the day bearable. The course was dry, hard and running, but the Greens were well watered, making for an interesting contrast to the fairways.

Andy Carter, the SGC skipper came for lunch to wish everyone well, and took the photographs on the tee before jetting off on holiday with his family.

Jim Scott, the SGC Secretary, was skipper of the day and took out with him, Tim Wheeler the current Clevedon Skipper. They were matched against Mike Kenney and Mike Grace.

This match report is poetic…Tim and Jim took on Mike and Mike. Mike played well and so did the other Mike, but Tim and Jim got their noses ahead of Mike and Mike and came home 4/3 winners.

It seems that this friendly game contained a personal 71 gross for David Bailey. Golf of this quality often wins and it did here, producing a win 3/2 for the Gwent boys.

Peter Preece and Bob Pritchard for SGC were matched with Paul Steveson and John Burrows of Gwent.

This game was nip and tuck all the way. Only two holes changed hands on the back nine, but the 15 foot putt Peter made on the last made the difference and SGC had another win 1 up.

Mike Nash and Neil Whisler were out next for SGC and took on Maurice Bridges and John Burrows.

It seems this was another close game, but a lip out on 17 was crucial for the SGC boys and they went down, 2/1. This was Neil’s first game for SGC and we look forward to him playing many more times.

Mark Moorfoot and Tony Taylor came next for SGC and took on Glyn Morgan and Michael Wood.

A good game but the visitors were more consistent and another win for Gwent, this time, 2/1.

John Perkins and Colin Davies came out next for SGC and found themselves playing Dilwyn Bull and Andrew Eveleigh.

It seems that all thought they had had a good game, but the SGC boys had the better game and nosed home 3/1 winners.

This game went right down to the wire, and in the end the winners were the Gwent boys, coming home 1 up.

All depended on the last game.

Garth must be the best 20 handicap on the planet and after 6 holes the SGC pair were 5 down. However they plodded on and  got back to 2 down, but the stroke 1 hole was their undoing and the Gwent pair then strolled in 3/2 winners.

This final match meant that this year the trophy headed back to Wales, on loan until next year. A great day of golf and both sides happily toasted each other looking forward to the next encounter.