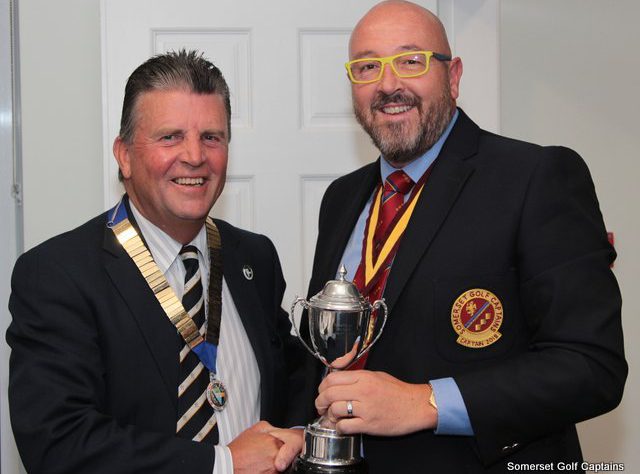 The annual encounter was played at  Taunton and Pickeridge Golf Club, on an overcast day which greeted the first few groups with drizzle, but the rain held off for the rest of the afternoon.

First out for Somerset was Skipper Andy Carter with local Captain Andy Willett. They were matched against Surrey Skipper Graham Woolcott and Stephen Woodward.

Derek Hansen and Roger Magor for Somerset took on Nigel Palmer and John Ledgard of Surrey. Derek was in very fine form, leaving Roger in his own words to contribute “strategic guidance”. Either way they powered to a 5/4 win

Next came Malcolm Terry and David Rich for Somerset, playing against Martin Prevez and Richard Broderick of Surrey. A close game produced the first win for Surrey whose better putting gave them a win, 2 up.

Paul Hucker and Steve Butterfield were the next Somerset pair and faced Brian Oluanaigh and Graham Horn from Surrey. This game were very complimentary as to the condition of the course, enjoyed some good golf and Somerset nosed home with a 3/1 win

Mike Snaith and Rob Ford for Somerset took on John Hayward and Jack Lambert of Surrey. The Somerset boys conceded they had lost to two good golfers. The Surrey win was 4/3

David Bate and David Powell now took the tee for Somerset against John Knight and Tony Coppin of Surrey. This game was reported as “nip and tuck” until the last few holes where the Somerset pair gained the upper hand to win 3/2.

The penultimate pair for Somerset was Geoff Rooke and Phil Barrett. They took on Dave Yabsley and David Duncan of Surrey. A close game but not even a Surrey chip in on the 18th could save the day for them and Somerset won this one 3/1

Harvey Sampson and George Davis went to the tee box last for Somerset and were matched against Ed Patton and Nigel Scandrett for Surrey. This match has some pheasant encounters and enjoyed a good game. The Somerset pair were generous enough to confess the right pair won. This was Surrey by 2 up.

The overall result was a win for Somerset by 5 games to 3, which meant Somerset retain the trophy for another year.