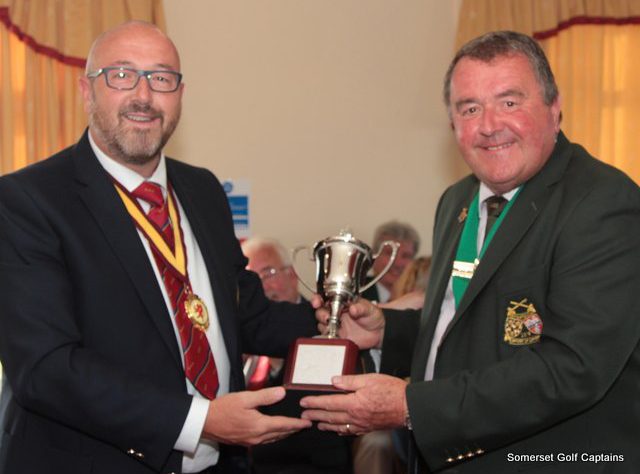 This match was played at Worlebury Golf Club on a lovely early summer’s afternoon.

The course was firm and running well, but the greens were very true.
Our visitors Hereford and Shropshire were on the second day of a mini tour having played Devon the day before. However they had refreshed their touring party with new players who had come down just for the day.
Match One
Andy Carter the SGC Skipper was accompanied by Steve Taylor the local Captain. They were matched against the visiting Skipper David Barless and Alan Jones. it seems that Steve and Alan “chatted” their way around. The game finished with a draw on the 18th. Andy mentioned his loyalty had been split between SGC and  Shropshire, the county of his birth!
Match Two
Tim Nichols and Mike Poole were next to the tee box and played against Fred Crouch and Martin Statham of H & S
A happy match of good golf, the greater part of which was for the home team. Somerset won this one 4/3
Match Three
Keri Allchurch and Erica Klim went out third for Somerset matched against Jerry Dutton and Ken Hayman of H & S.
The SGC team were delighted to have Erica playing in her first match and hope to see her in many more matches. The difference in the teams was the putting and the visitors putted better for  a 3/1 win
Match Four
John Paterson and David Williams came out next for SGC and took on Rob Davies and Colin Wall for H & S.
The report mentions Rob’s birdie and that seems to have made the difference for a win for H & S by 2/1
Match Five
Jeff Saunders and John Whitewood were out at five for SGC and their opponents for H & S were Roger Thomas and Wref Digings. Another game of great enjoyment but the result favoured  H & S by 2/1
Match Six
Mike Snaith and Andy Williams were the next SGC pair and took on Roger Elston and Ken Butler of H & S. Captain’s golf is always enjoyable and very much so in this game. The players agreed that the half was a fair result
Match Seven
Steve Rowlands and Paul Smith for SGC found themselves playing Gordon Jamieson and Paul Foster of H & S. Another match of great spirit and enjoyment with many “gimmes”. The gimmes favoured the SGC pair who won 5/4
Match Eight
Last out for SGC was match manager Bob Acland and Mike Rossiter who encountered David Ralphs and Roy Roberts of H & S. This game could have made all the difference to the result and it was a win for H & S , 2 up, that gave H & S the overall win on the day. Nevertheless the players had a great game in the friendship and spirit that is always present in Captains’ matches.
Vice President Bob Acland, match managed for the first time  for SGC
and all were grateful to him for a job, very well done.