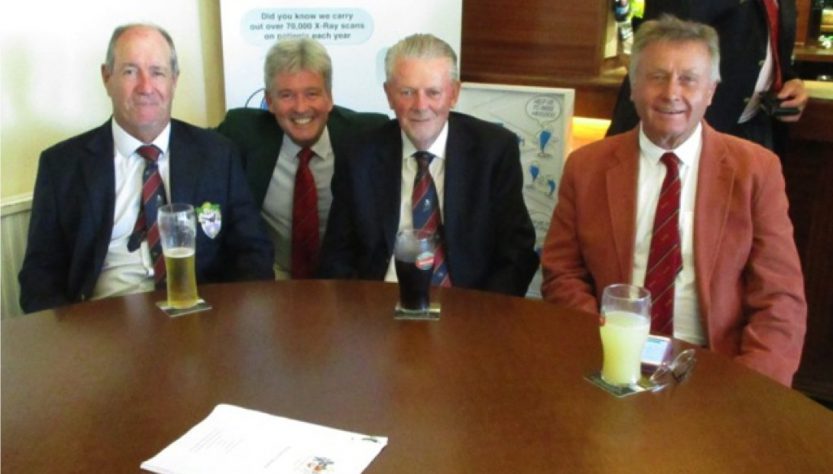 A fine, dry but windy day greeted the two teams at Weston Super Mare, before Club Captain Chris Homer shared some history over lunch. In a fascinating insight into the past, Chris drew attention to the history behind this fixture, as this extract will illustrate. Chris said:

If we look around the room at the competition boards there are a few names you may recognise. The Hood Wright trophy which is named after Donald Hood-Wright who established the South West secretaries back in 1956 to form part of the golf association of golf club secretaries.”

We also have the Bob Riddell Bowl. Bob Riddell was appointed and is believed to have been the first full time paid secretary of a golf club in the British Isles.”

Match one was a game of two halves, with Captain-Elect John Beer & WSM Club captain Chris Homer playing against Alan Creber & Ian Griffiths . The front nine was nip and tuck with Somerset two down at the turn. But then four straight wins meant they were two up! The game was won on the 16th to seal a 3&2 victory.

In match two, the Somerset pair of Bill Campbell & Pete Lang went two down at the start against Ray Griffiths & Bob Clark. But they were back all square at the turn. Putting made all the difference on the back nine, especially from Ray. Good golf but Somerset went down 4&3.

In match four, the two J’s of (Mendip member) Jim Scott & Julian Reynolds were four up in four holes for the Golf Club Managers. Despite a valiant fight back from the Somerset pair of Keri Allchurch & (Mendip member) Mike Snaith, the managers prevailed on the last to win two up. What a great result for Jim after all the pre-match banter. Great fun! The overall score was now 2-2!

In match five, David Andow & David Bate played against Geoff Green & Jim Mills. A very enjoyable game played in trues golfing spirit: nip and tuck throughout and all square at the turn. But the two Somerset Davids then edged ahead as the wind grew stronger to win by 3&2.

Match six between Stuart Mason & Rich Bartin, for Somerset, playing against John Hirst & Jim Cunning was well balanced and looked like it would go the full length. But then Stuart pulled the winning punch – taking out the ½ ton 150 yard marker with his buggy; then doing a 9.5 double somersault out of the buggy! The opposition were so shocked they never got back in the match losing 3&2!

Match seven was an entertaining game which was never in doubt for Somerset with Derek Hanson playing some very steady golf alongside his Somerset partner Steven Butterfield. Good to see Brian Rimes, and his partner David Wensley, again – a friendship going back over 35 years. The winning score for Somerset 2&1.

And finally, on a nice windy day, Roy Parmiter & Tony Taylor edged a good game against the best two 21 handicappers on the planet: Vic Tofts & Malcolm Wilkinson! Great company. Vic and Malcolm played great but Somerset ran out the winners by 2&1.

And so, the final result was :

Congratulations to all concerned.