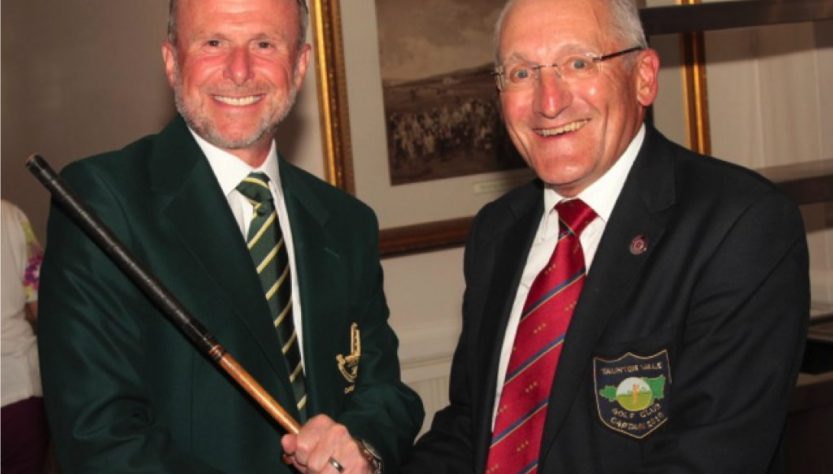 The weather on Thursday 16th August was cloudy and very windy – but dry! A major topic of conversation, both on the course, and over dinner, was the recent grass fire with had taken hold on the land between the 7th, 8th, 9th, 10th, 11th and 12th fairways.

First out were John Beer and Tony Taylor for Somerset Golf Captains, playing against Stuart Cook and Trevor Jenkins for Burnham. This was a great game with good company. Trevor Jenkins (playing with clubs the same length) had the game of his life; starting with a 30 foot put for par on the first, and a miraculous recovery shot from under a tree 180 yards out on the 13th. John and Tony were behind all the way and eventually lost 4&3.

Next out were David Bate and Steve Rowland for SGC, playing against vs former Captain of Captains Frank Ryan and Paul Hucker. David and Steve enjoyed the course and played with two real gentlemen who helped them win by 6&5.

Phil King and Phil Slater played against current Burnham Captain Mark Woods and his partner Adrian Deakins, playing off a handicap of 1! Baa-baa! Baa-baa! “Lambs to the slaughter” in this match! The two Phils watched some good golf and enjoyed some great company. Well done to Burnham Captains Mark and “Deaks” who ran out easy winners by 7&6!

Match manager Steven Butterfield  and his partner Mark Moorfoot played against David Jenkins and Robin Griffiths in match four. A very enjoyable match, played in great spirit. It was close all the way and the players agreed to halve the match on the 18th.

So, after four completed games, the match score was currently: Burnham 2½, SGC 1½. All to play for!

In match five, Jim Crummey and Colin Mantle took on Martin Wilkins and David Harries. Great company but Jim and Colin wondered why “8” handicappers have to play off to their handicap. Yes – they lost 4&2!

Old friends Jeff Saunders and Paul Chesney were next up for SGC and played against Richard Turner and Harvey Sampson The two ex-Taunton Valer’s got off to a flying start as they found the opposition in a generous mood; and were 3 up after 3 holes! Richard and Harvey kept getting one back – only for the Somerset boys to get it back again. Despite a strong finish by Burnham, Jeff’s putter found him on the 16th & 17th for a 2&1 victory.

Match seven saw Roy Schubert and  Jim Scott take on Mike McCarthy and Trevor Hicks. This was a very good game; nip and tuck until holes 14,15,16 when the Somerset Captains found their putting touch to secure a 2&1 victory.

Things were now getting very interesting! After seven completed games, the match score was currently: Burnham 3½, SGC 3½. Everything depended on the final match!

So the overall match result would be determined by the result between Mike Usher-Clark and David Steele in their match against Geoff Robinson and Peter Amos. And when you meet a hammer and an anvil, you come out flattened! The hammer and anvil in question were true gentlemen from Burnham and it was a pleasure for Mike and David to lose 4&3!

So the overall result was: Burnham Past Captains 4½, Somerset Golf Captains 3½.

After speeches from the Lady Captains Liz Biddle and Sandra Ford, Mark Wood stressed the history and tradition behind this fixture. In his reply SGC Captain Elect John Beer recalled his first ever appearance for SGC alongside Frank Ryan against Cornwall at Taunton Vale Golf Club in 2010. John also took the opportunity to thank former President Trevor Jenkins for his contributions to the Association over many years. John then recommnended his current book of choice entitle “The Art of Matchplay”, especially the chapters dealing with the following topics:

We would like to thank the SGC match manager Steve Butterfield for his time, efforts and organisation.