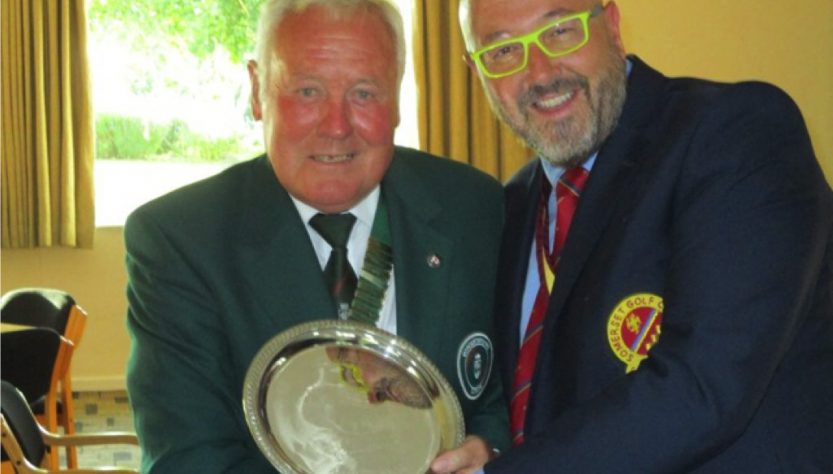 Phew – what a scorcher!

This match was played at the height of the June heatwave, with temperatures around 30 degrees; fairways rock hard and starting to scorch; and super greens. The decision to dispense with jackets and ties was taken before the match actually started! But what a great day for golf. Welcome to new members making their debut for Somerset Golf Captains ; Gary Barnett & Matt Baker both from Saltford Golf Club. Hope to see you both again soon.

In match one, Worcestershire players Roy and Kevin provided stern opposition for Somerset Captain Andy Carter and Saltford Captain Gary Barnett. This game was all square going down 17, before Worcestershire finally put Somerset to the sword on 18! Roy plays off 16 (alledgedly? – it was requested that his card is forwarded to the handicap secretary!)  He played very well; often using the trees and other on-course obstructions to improve his shots! Seriously, a great pair deserved their win 2 up.

Match two was a game of two halves: Nick Bye played the front nine, and Matt Baker played the back nine! Somerset won the match 4&3 with great company and a good laugh!

Match three between Roy Parmiter & Mark Moorfoot against Roy Everett & Nigel Blay was also a game of two halves with puts going in at the right time. The game was played in good spirit with good banter; Roy and Nigel were good company and the match was halved.

In match four, Peter Preece & Mike Nash were well beaten by the better team of Richard Hardy & Ian Jones. The final result being 7&6 to Worcestershire with each of Somerset pair taking their share of the responsibility.

In match five, John Beer & Glynn Sewell lost to Mike Swan & John Holt by the score of 4&2.The game was actually closer than the result suggests with good golf played by all; and very enjoyable company.

Match six between Geoff Rooke & Dave Rich against John Palmer & Stuart Denyer was played in good spirit. Somerset lost 2&1 due to Stuart’s red hot chipping, which Somerset could not match.

A resounding win for Somerset followed in match seven, where Steve Butterfield & Richard Dore beat Grenville Rose & Colin Day by 7&6. A very enjoyable round in great company. Unfortunately for Worcestershire, six birdies were enough for a comfortable Somerset victory.

The score line was reversed in match eight where Chris Warcup & Malcolm Head lost to Paul Walker & Roger Brierley by 7&6. Somerset were beaten into the ground by a very good pair.

We would also like to thank Chris Warcup for acting as match manger for Somerset for this fixture. Well done Chris.