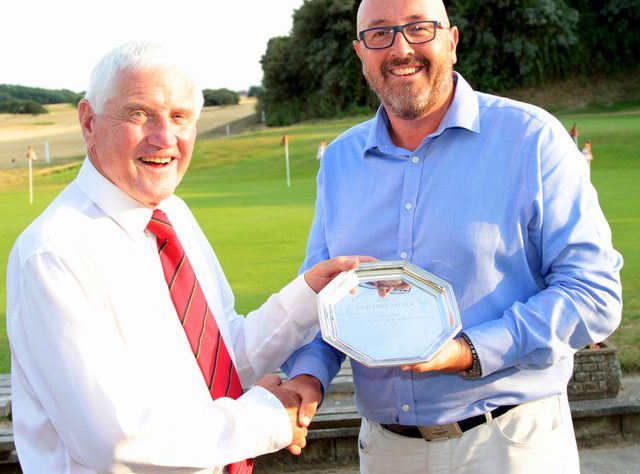 The match where the Captains play the Somerset Golf Union Executive, is always a great day, as most of the players know each other and quite a few could play for either team.

Monday 9th July was a hot summers day, not a cloud in site and the course at Weston super Mare GC running hard and fast and the greens slick and therefore putting speed was the essence.

Skipper Andy Carter paired with Erica Klim led the SGC team out, playing against SGU current President, Paul Middleton and Alex Kidd. Never a game with much in it, but shaded by the SGC pair with a 2/1 win.

For SGC, Bill Campbell and Murray Parsons were matched against James Ward and Alex Kidd. The SGC boys got back level at the 12th, but were blasted by an eagle/birdie/birdie run for the SGU pair and went down 3/2.

George Davis and Mike Rossiter next took on Derek Hansen and Dennis Longden of the SGU. A ding dong match with really good golf on both sides, but in the end the SGC boys came home winners by 1 hole.

SGC next fielded Steve Parker and Jeff Saunders who were matched against John Perkins and Steve Butterfield for SGU. Much banter, much humour and competitive golf here led to a halved game.

The seasoned pairing of John Chillington and Colin Davies were out next for SGC and took on Ian Poole and John Parker for SGU. It seems John Chillington was in great form and ably assisted by Colin, they brought in a resounding 5/4 win.

Mike Poole and Tim Nichols were next to the tee box for SGC and found themselves playing against John Keight and Paul Wills for SGU. Not much to say about this one, except that the SGC boys lost 1 down.

Bob Acland and SGC President, Mike Usher-Clark went out last and had a great game against Richard Dix and Norman Banfield. This was Mike’s first golf in two years with two new knees. The SGU boys very graciously gave him some courtesy shots. However somehow the SGC pair managed to win holes here and there, finally coming in winners by 6/5. This match represented the true spirit of the game and golf was the overall winner here.

In view of the current hot spell, relaxed dress was agreed and after entertaining speeches by Andy Carter and Paul Middleton, the trophy was presented to the SGC.

The trophy is the Metcliffe salver, jointly donated in 1999, by Rick Metcalfe and Ken Hinchliffe.

Since then, the overall tally of wins is