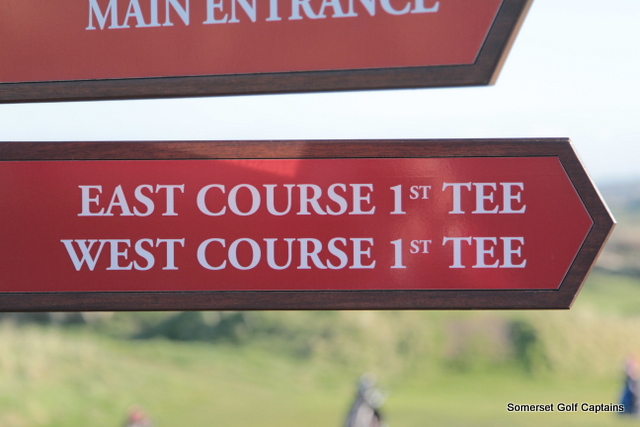 The match is now really the start to the SGC season. In previous years the weather has been both kind and awful. This year the start had to be delayed due to a sea fret cutting visibility to 15 yards at its worst, but once the sun came up the mists were gone and a glorious day’s golf started.

Saunton has two courses, East and West, and each team is split between them.

The views are stunning across a lunar landscape and the courses do not play easily, therefore asking the best from all the contestants.

We entered full of hope and ambition , but conscious that our run of three wins on the trot would be difficult to sustain.

However as the reigning champions, the SGC flag flew at the top of the Saunton mast against a clear blue sky, throughout the day

Starting his season as Team Captain, Skipper elect John Beer was teased by his predecessors that he had to win, but what ever the result it was not his fault as he had not picked the team!

The selector and Match Manager for this was Roy Parmiter, to whom we all offer our thanks for his hard work.

However many from the successful previous year’s were teeing up again.

With such a large field of 144 players even with 2 courses, there is quite a delay until all 144 can sit down together as teams. The atmosphere is without equal, with fun between playing opponents and friendship rekindled after the winter break.

The Saunton Skipper welcomed all to the course and hoped everyone had had a good day’s golf.

In response on behalf of the guests, John Beer made a charming speech, boding well for his after match speeches during the coming SGC season.

After the presentation of golf balls to those who had managed a two, the results were called.