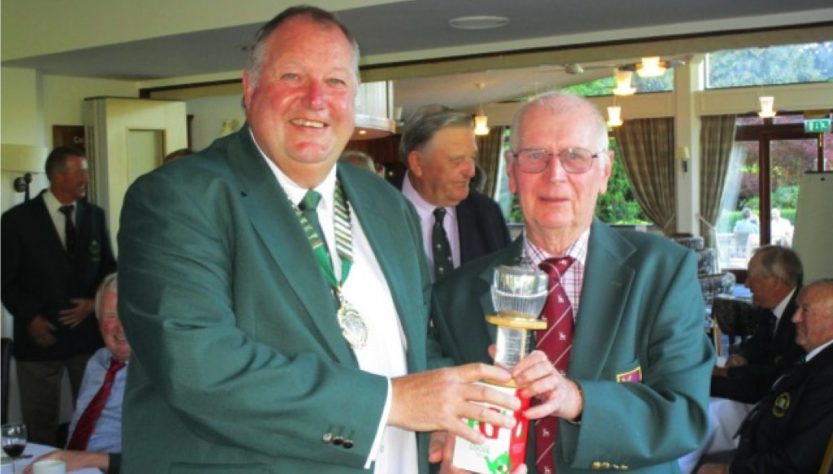 If Carlsberg did golf days, …. they would all be like the annual Four Counties tournament held at Bath Golf Club on Thursday 21 June.

This annual competition is based on six pairs from each county, playing 4-ball better ball off the yellow (or red) tees. The top five scores are aggregated to produce the team result for each County (with the sixth card held back as a ‘tie-breaker’ if necessary). A prestigious evening business commitment meant that Somerset Captain Andy Carter assumed the role of official starter (and photographer), in the daytime.

The course was in top condition and it was a perfect day for golf . Somerset President Mike Usher-Clark and Treasurer David Andow operated the reception desk and continued with their calculations as the teams came back in.

Before announcing the results, Mike Usher-Clark invited Colin Tushingham from Berkshire to remind colleagues of the origins of the trophy donated by Berkshire golfer Sid Hoare , who worked for PG Tips, which is why the trophy is always accompanied by a packet of loose-leaf tea!

The competition between the county teams was very close. Just four points separated Dorset in fourth place with 182 points, and Berkshire in third place with 186 points. It was even closer for the first two places. Somerset had 192 points but Wiltshire came out on top with 195 points.

Colin Tushingham presented the prizes to the winning pairs and to the winning players from Wiltshire. In response, Wiltshire Captain Andy Hatter thanked Somerset for their organisation; Bath Golf Club for hosting the event; and the caterers for a superb meal. The only slight disappointment for Andy was that Somerset Captain was not there to witness Wiltshire’s success; recalling the last meeting of the counties at Saunton for the Six Counties (when today’s starter almost didn’t make it to the tee on time!). Andy confirmed that Wiltshire will defend the trophy next year at West Wiltshire Golf Club.

Somerset President Mike Usher-Clark, after congratulating Wiltshire, said of the Somerset Committee –  “We did Somerset proud today. The other counties were very complimentary. Thank you to everyone for your contributions today. “

The Somerset team would like to thank Roy Parmiter for his efforts as match manager for this fixture, and also to the other officers who did everything to ensure the day was such a success: Secretary Jim Scott, President Mike Usher-Clark and Treasurer David Andow.