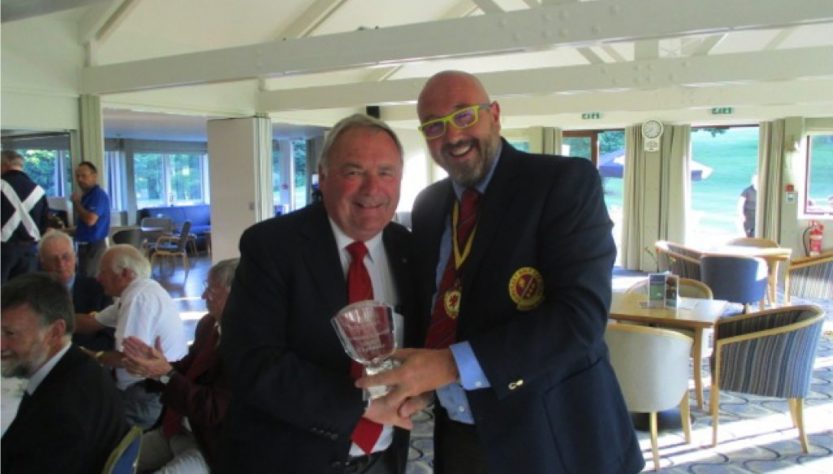 A glorious day for golf as the sun shone on the Somerset Golf Captains match against Warwickshire Golf Captains at Enmore Park Golf Club on Monday 11th June 2018.

In match one, Somerset Captain Andy Carter and Enmore Past Captain Rob Fear took on the Warwickshire Captain John Pritchard and his partner Ivor Ford. The Captain led the way for Somerset who secured the first point of the afternoon with a 3&2 win. Over dinner, the conversation noted that it was nice of the Captain to leave behind plenty of balls for the members to search out in the week ahead!

Match two was closely contested when Roy Parmiter and Mike Stringer halved their game against Graham Pulow and Tony Ranger. A lovely sunny day was had by all; up and down the mountains of Enmore; and not a medic in sight to resuscitate.

The winning ways continued in match three, where Paul Chesney and Phil King secured a 4&3 victory against Martin Elliot and Dennis Ellis. The match was played in good spirit with steady Dennis made some cracking puts. Despite Phil’s attempt to run Paul over with his trolley to give the opposition the edge, it was the Somerset boys that edged the game.

Warwickshire won their first point of the afternoon in match four where Stephen Parker and Frank Ryan lost 4&3 to Mike Gregory and Alan Moore. Stephen had to give ten shots, which was very difficult, but two very nice guys in Mike and Alan.

Half way through and the score now: Somerset 2½ Warwickshire 1½.

Warwickshire were back on level terms after match five, when Rich Bartin and Derek Sutton were 2 down against Ron Saywell & Gary Thompson. This was a constant battle, but after going three down to a chip in on the 9th, Somerset struggled back to all square – before finally losing on the 18th to the ‘Nearest-the-pin” winner.

In match six, Somerset Secretary Jim Scott and Trevor Watts played against Rod Williams and Duncan Hay. Great weather; lovely course; and good company. The visitors got off to a good start and, try as they may, the Somerset pair could not get back before losing 4&2. Warwickshire were now in the lead by 3½ to 2½!

In match seven, Dennis Compton and Andy Williams had a great match against Tom Simons and Barry Pegler. Eleven holes were halved and Warwickshire birdied the 17th to bring it back to level; which is how the match eventually finished. A half was the right result! Everything now resting on the last match!

In match eight, Chris Warcup and John Perkins enjoyed the excellent company of John Loynton and Robert Kemp. After a perfect day, Warwickshire came out on top by 4&3. Well done to Robert for his superb putting.

So the overall result was Somerset 3, Warwickshire 5! Well done to all concerned.

And special thanks to Somerset match manager George Davis for organising the event on our behalf.