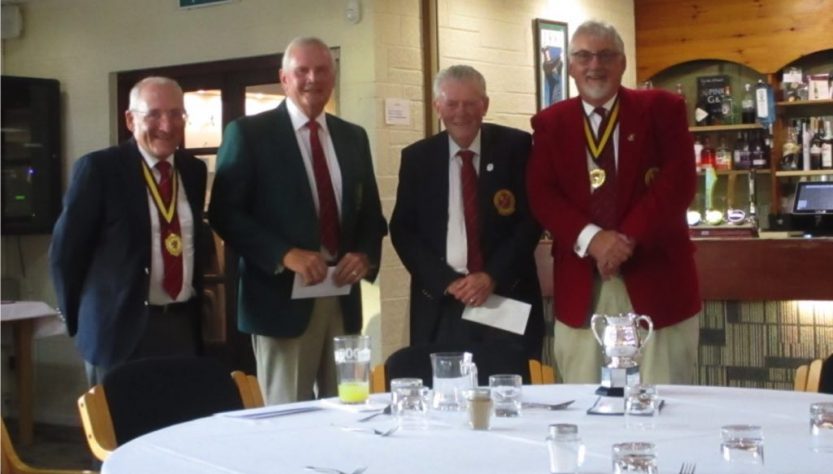 Warm sunshine and a gentle breeze provided perfect conditions for golf when Somerset Golf Captains held the Autumn meeting at Saltford Golf Club on Thursday, the 19th of September. The event was well attended with 68 past captains competing in a four-ball better ball competition off the yellow tees with full handicaps.

Before the start of play the members enjoyed a delicious bacon roll and coffee.

The course was  in fantastic condition with fairways and approach areas presented immaculately.The greens had been hollow tined two weeks previously but local member and past captain David Roberts, who is also Chairman of the Saltford greens committee, had arranged to have the greens rolled prior to the start of our competition

Upon completion of their games the past captains enjoyed a delicious carvery served by the Saltford catering team.

Undoubtedly the highlight of the day was when President Mike Usher-Clark called members to attention  in the customary fashion of tapping a spoon against one of the crystal tankards, which were about to be presented as prizes to the winning pair. Mike clearly did not know his own strength as the crystal glass in his left hand shattered into tiny pieces when it was struck by the spoon in his right hand –  much to the amusement and merriment of those people watching.

Mike quickly recovered and invited the local captain Marcus Woodward to say a few words. Marcus spoke very warmly and very wittily about his first year with Somerset Golf Captains, including the warmth of the welcome he had received at the Spring meeting at Oake Manor. Marcus also remembered fondly the toast he had received from the Somerset past captains a few days before his wedding when we played against Worcestershire. In particular, Marcus remembered the number of past captains who were keen to advise him that it wasn’t too late for him to change his mind! Marcus also described his experience of playing with Mike Usher-Clark against Gwent. The Somerset pair were three down with four to play, but then won three holes in succession to level the match on the 18th tee. At this point President Mike suggested that the teams shook hands and agreed a half – which is exactly what happened (even though Marcus felt the momentum was with Somerset and indeed he went on to birdie the 18th!) Marcus used this example to illustrate what he felt was the essence of golf with the Somerset past captains and the importance of playing the game in the right spirit.

Before announcing the results, President Mike Usher-Clark thanked everyone involved at Salford Golf Club for the superb hospitality including the bar and catering staff and of course the greenkeeping staff for the way in which they had presented the course.

The scores were not quite as high as those recorded at the spring meeting at Oake Manor (when both scores on the par 3’s were allowed to count). After some careful deliberation and scrutiny the results were announced as follows

3rd: Mike Snaith and John Chillington 42 points (on count back)

The President then announced the results of the Griffiths Cup. The Griffiths Cup is presented to the individual golfer with the highest combine score after you add their team total from both of the spring and autumn meeting. There are indeed some illustrious names on this and in 2019 the winner of  the Griffiths Cup was Malcom Head of Long Sutton

In his closing remarks, the President paid tribute to the outgoing Captain of Captains John Beer on what had been a very successful season and  extended best wishes to next year’s Captain of Captains Stephen Butterfield. Mike Usher-Clark also reminded members that the annual dinner would take place at Taunton Rugby Club on the 7th of February next year.