Home>News>Somerset win away on tour! 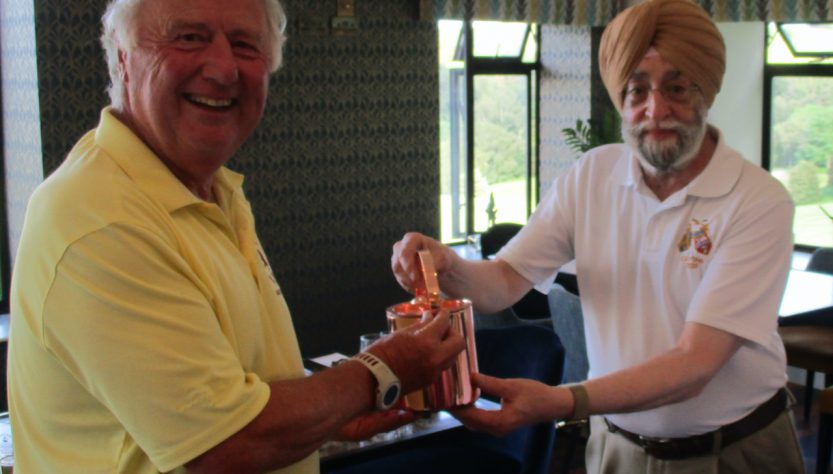 A team of 14 left Somerset on Wednesday, the 16th of June to travel up to the Herefordshire Golf Club to renew our fixture against the Golf Captains of Shropshire and Herefordshire.

This fixture was cancelled two years ago when the Wrekin Golf Course was closed due to rain;  but this fixture was completed in glorious sunshine and perfect golfing weather.

After an interesting journey for some Captains (with road closures and picturesque Herefordshire valleys) the teams met up for a bacon roll and coffee before setting off to compete on this beautifully rolling undulating course. Those with buggies certainly made the right decision and those with trolleys found it a very tiring walk but the course was in superb condition.

In a match one, Captain of Captain Stephen Butterfield and his partner Phil Barrett played against the home team Captain Amrit Singh and his partner Roger Thomas. This was a great match it went to the 18l. In good company and patches of very competitive golf, the captain held the fort well and Somerset were one up at the end.

In match two, President Bob Acland and his partner Colin Davies played against Paul Foster and Ken Hayman. This was a super game and a great competition. Everyone enjoyed the course but in the end the opponents were too strong over the last three holes and won by 2&1.

In match three, John Beer and Rob Hardy played against Martin Statham and Andrew Merrick. Another great game on a course with made Enmore Park look flat! A close game until Somerset won holes 7, 8 and 9 to go three up at the turn. Somerset held on to win 4&3, but Hereford and Shropshire asked if cowboy Rob has left his horse tied up outside?

In match four,  David Bate and Nick Prince played against Chris Gettings and John Devereux. A very enjoyable game in good company on a tricky course in excellent condition. Somerset were one up at the end and believe that they thoroughly earned their fish and chips.

In match five, Chris Warcup and Rob Ford played against Phil Lawrenson and Bob Holloway. Such a beautiful course but Somerset lost to a very good golfer and his 15 shots. Hereford and Shropshire were 4&3 up at the end.

In match six, Geoff Rooke and Murray Parsons played against Steve Payne and Pete Davies who were excellent company. Somerset tried hard to lose it on a good course to win two and one and are looking forward to the rematch next year.

In the final match, Mike Usher-Clark and Jeff Saunders played against Paul Buckley and Dave Wallace. This was another very enjoyable match but Somerset were beaten by two players who were on form win by two and one.

And so the overall match result was Somerset 4, Hereford & Shropshire 3

Somerset completed a memorable victory to regain the trophy which had previously been presented by former President Mike Usher-Clark. However, Somerset were denied the opportunity to have their name in graved on the trophy, when the original trophy could not be found!! Both captains made entertaining speeches and an impromptu presentation was made using an ice bucket from the bar.

We would like to thank the match manager Rob Ford for everything he did in organising this trip.

Captain of Captains Stephen Butterfield would like to thank all the players that took part, for their company and fine fellowship.