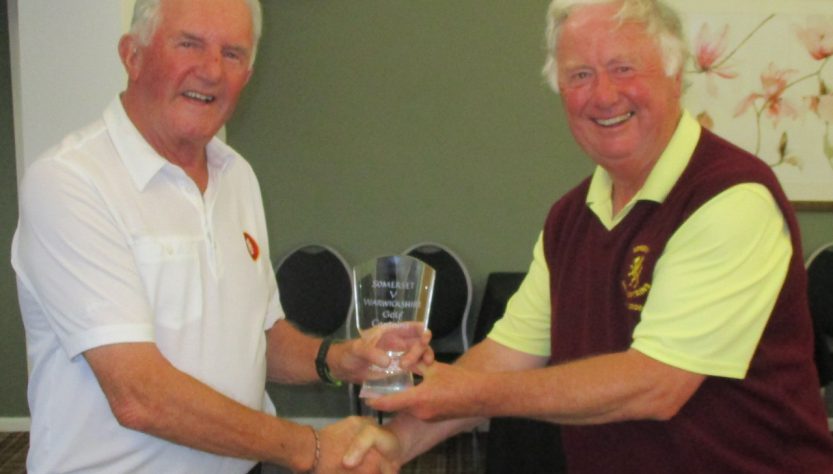 On the second day of the trip the party left the Three Counties Hotel in Hereford and drove cross-country to the Kenilworth Golf Club in Warwickshire, to be again greeted by glorious sunshine which made a stark contrast to the rain of two years ago when the game which was due to be played at Robin Hood Golf Club was postponed because there was a restriction of carry bags only.

After a light lunch of sandwiches and chips on the terrace match managers Tony Ranger and Rob Ford announced the teams and local club captain Mark Draper said a few words to welcome both teams to Kenilworth Golf Club.

In match one, Captain Stephen Butterfield and Chris Warcup played against David Williams and Mark Draper. This was an excellent course and excellent company although Somerset lost by being one down at the end. We would like to thank the hosts for a lovely afternoon.

In match two, Bob Acland and Rob Hardy played against Nigel Metcalf and John Butler. This was a very enjoyable day in good company on an excellent course. Fortunately the two Roberts won a hole each in the last 3 to half the match which finished all square.

In match three ,John Beer and Nick Prince played against Tony Ranger and Rod Williams. What a great game of golf ! Warwickshire quickly went three up after five but Somerset won three holes in a row i(including two birdies) and the match was all square after 9! Two more birdies on holes 11 and 14 and the match was all square again after 16. Then Rod used his shot to win 17 ,and a  half on 18 meant that Somerset were one down at the end.

In match four, David Bate and Colin Davies played against Ian Phipps and Ron Saywell. Both enjoyed the course and the company in a great setting. After going three down after 10 holes,  Somerset came back to win the 18th and finish one up.

In match five, Rob Ford and Jeff Saunders played against Mike Edwards and Neil Woods. A slow start meant Somerset were three down after three,  and then a very enjoyable and friendly match followed but Warwickshire came out as winners by 4&3.

In match six, Geoff Rooke and Philip Barrett played against Keith Lindsey and Gordon Williamson. This was played in excellent company on a superb course and a very enjoyable game for everyone. Sadly Somerset came second and lost by four and three

In match seven, Mike Usher-Clark and Murray Parsons played against Doug Rawkins and Robert Kemp. It was a pleasure to play against two gentlemen from Warwickshire in a nip and tuck match which Somerset won by 2&1.

And so the overall result was Somerset 2 1/2 ,Warwickshire 4 1/2 and Warwickshire retained the trophy which had originally been presented by Rob Ford.

Captain of Captains Stephen Butterfield would like to thank all the players that took part, for their company and fine fellowship.