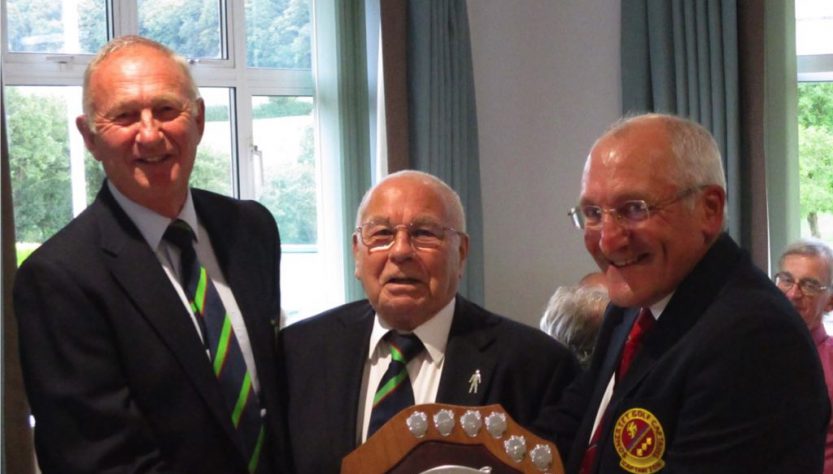 Wells Golf Course was in perfect condition on a warm and sunny day, with only light winds, when Somerset Golf Captains played against Wells Golf Club Past Captains on Tuesday, the 12th of August 2019.

At lunchtime, the captains were joined by Somerset Golf Captains Past President Ken Hinchliffe and Wells Golf Club Past Captain Alan Shore. This fixture was originally initiated in discussions between Alan Shore and Trevor Jenkins with the first  being played in 2001.

In match one. Somerset Captain John Beer and his partner Ben Gliddon played against Wells Captain of Past Captains Andy Williams and George Davis. Ben started well with a shot on the first-until he played the wrong ball! Wells were soon three up although Somerset did get this back to only one down after eight – thanks to Ben’s monster putt left-handed (!) on the 5th. Then George Davis gave a typical George Davis performance, with Andy dovetailing well, so that Wells ran out as a victors by the margin of 4&3.

In match two, Rob Fear and Colin Warnes played against Erica Klim and Steve Bocquet. This was a great game of golf played against fabulous opposition. The match went all the way to the last hole. The hosts nearly overcame a five hole deficit but succumbed to the trees on the last hole. Somerset winning by 2&1.

In match three, Glyn Sewell and Richard Dore played against John Chillington and Richard Booth. Even with a birdie start this was still a tight game – all square after nine. A close fought back nine saw Glyn and Richard edge a fairly even game. The course looked great and the company very enjoyable. Mike Rossiter’s coaching of Glyn last week at Ponypool obviously worked! Somerset winning by 3&2.

In match four, Trevor Watts and Bob Smith played against Derek Biggs and Clive Keene. After a very close front nine (all square) with all players sinking at least one long putt, Trevor and Bob showed signs of exhaustion and faded away to give the hosts a comfortable victory by the margin of 5&3.

In match five, Tim Nicholls and Mark Moorfoot played against Stuart Mann and Colin Mantle. This was nip and tuck all the way but local knowledge carried the day. Great company but Colin needs to learn how far he hits a ball! (Ask the group in front) Wells winning by 2&1.

In match six, Vice-Captain Stephen Butterfield and his partner Phil King played against Malcolm Terry and Eric Loxton. This was an excellently close-fought game for 15 holes and then Malcolm took charge giving himself and “Tiny” a good win. Nice to play on grass fairways and everything in good condition. Wells winning by 3&1.

In match seven, Dean Evans and Mike Snaith for Somerset played against Bob Lench and Phil Slater. It was a great game with great opponents and good banter. Dean enjoyed playing with Mike for the first time : Mike looked after the front nine until Dean got involved on the back 9 to secure a victory by 4&3.

Last, but by no means least, in match eight, Chris Warcup and Paul Hucker played against Adrian Lawrence and Steve Rowse. Somerset were beaten into the ground with Steve Rowse finishing three over gross playing off a handicap of nine!  Wells winning margin of 5&4.

So the overall result of this most enjoyable match was: Somerset Golf Captains 3, Wells Golf Club Past Captains 5.

The banter and chatter in the bar area and in the restaurant over dinner provided evidence of the tremendous friendship which exists between these two teams. In his speech, Somerset Captain John Beer thanked everyone at Wells Golf Club for their exceptionally warm welcome and for presenting the course in such superb condition. John also drew attention to the fact that this fixture is now unique in the annual calendar for Somerset Golf Captains – being the only we play against a collective group of past captains from a particular golf club. John felt that Wells Golf Club should be very proud of maintaining this tradition and hoped it would continue for many years to come. John also took the opportunity to tell a few jokes which redressed the balance of the ones which may have been considered politically incorrect last year!

We would like to thank our  manager Chris Warcup for everything he did in organising this event.