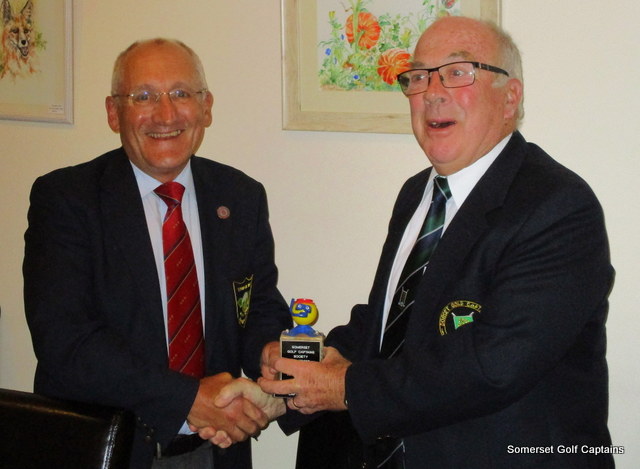 For this fixture played on the 10th August,  the SGC players eventually managed to get to Knighton Heath, as all the traffic in the area had connived to delay them.

The weather in Somerset had been awful as the players left and everyone was glad to see the Bournemouth sunshine on arrival. However that was not to last and the first matches out, faced driving rain, like side ways stair rods.

Happily this faded away to light showers and eventually stopped. The course is classic heath-land golfing territory, and the sort of course that you want to visit again soon.

John Beer the SGC Skipper of the day led out with David Powell against Bill Kent and Alan Hebditch, for Dorset. Alan played well, Bill lost many balls, John was tidy and David was outstanding. The result of all this was a 6/5 win for SGC. Somerset really like Bill as he was very complimentary about our website. Thank you, Sir.

Erica Klim and SGC President Mike Usher-Clark went out second for SGC and faced the might of Dorset’s octogenarian pair, Bill Kennedy and Brian Walsh. The older gentlemen gave a lesson in golf and gently picked the Somerset pair’s pockets to the tune of 5/4.

Roy Parmiter SGC Fixtures Sec and Richard Clist went to the tee box at number three, playing against Dave Picton and John Ross of Dorset. Roy and Dave are the very best of buddies but the game was serious and after an early lead, Dorset werer hauled back and with the help of Roy’s jigger the SGC pair won 4/3.

Phillip Slater and Rich Barton were the next SGC pair and matched up to David Kimberley and David Barton. The SGC boys felt the “Daves” were excellent Company and the better golfers on the day. Dorset won this one 3/2.

Bob Acland SGC VP and Robin Griffiths took to the tee next and were matched against Mike Rawlinson and Ken Grout. The SGC boys were five down after five holes due to Mike (16hcp) being one over gross. However they fought back with true grit and were only one down at 16, but the end was nigh and they lost 3/1

For SGC, Geoff Rooke, sadly alone took on Graham Wilkin and Jim Arth. This was no Rourke’s Drift for Somerset and Geoff manfully succumbed 8/6

Steve Butterfield and Mike Snaith went to the tee box next for SGC and took on Arthur Soar and Alan Bates of Dorset. Three ex Servicemen in this game created a wonderful humour level and persistence from the SGC boys produced a 5/2 win.

George Davis and Phil Barrett for SGC were the last out, facing up to Ron Rogers and Chris Knight of Dorset. In great spirit this was a well contested match but Dorset had the edge and came home 2 up winners.

The result was therefore a 5/3 win for Dorset and the trophy changed hands again to go back to Dorset. A great day despite the early weather and as always we look forward to meeting again in 2019.

SGC Captain Elect and Skipper of the day, John Beer proved he needs no practice for next year. His speech was witty and generous, and he returned an initialed Dorset Captains’ golf ball he had previously found elsewhere in Dorset.

He also passed on greetings from SGC Skipper Andy Carter who it seems had met up with a pole in Spain!!!