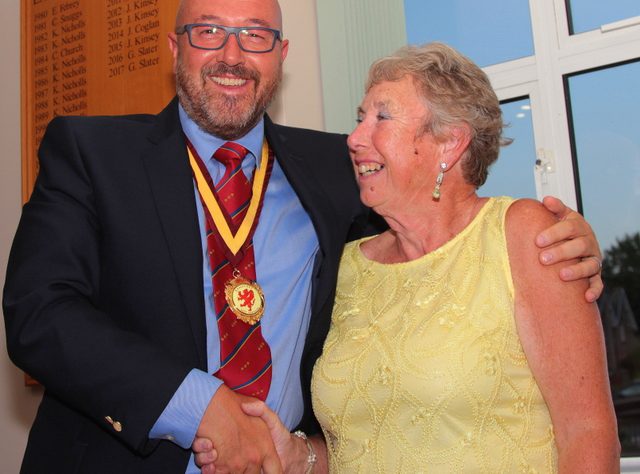 The SGC match against Somerset Ladies Past Captains Association (SLPCA) is quite new to the fixture list but unique and played on a different basis to the normal 4BBB match play.

This year we were “away” at Wells GC and looking forward to reversing the thrashing recently experienced at the hands of Wells Captains again at Wells.

The ladies wanted to return to the rules they like best, so of course the gentlemen agreed.

Men off the white tees

Ladies off the red tees

Men off their card

Ladies off their card

Ladies having one extra shot.

This leads to a situation in many games that the men played the hole as a long par 4, the Ladies as a par 5, and many of the ladies had two shots for the hole. Could the rules have been more generous for the ladies, and that may be a hint?

SGC Skipper, Andy Carter, fresh back from his holiday was partnered by David Bate. Their lady opponents were Sheena Smith and Yvonne Bate. An interesting encounter as Yvonne and David are man and wife.

A good friendly game, so friendly that the ladies won 3/2

Rob Ford and Tim Nicholls were next for the men and took on Carole Patterson and Jenny Davis for the ladies.

Now Rob plays a lot of mixed golf with his wife Sandra and knows how to put the pressure on. This worked and he and Tim won nicely 4/2.

George Davies and Chris Warcup were the third pair for SGC and played against Lyn Gridley and Ros Gait. Now it takes a good match to beat George on his home course, but that is what happened and the boys went down by 2 holes.

Colin Warnes and Bill Campbell for SGC went to the tee box to oppose Sue Chambers and Jackie Long. The match report description of this encounter is vivid and poetic. The men felt that they had been ‘kippered’ and that the ladies had so many birdies that it was more like an aviary. that explains the men losing this one 6/4

The next pair for the men were Roy Schubert and Jeff Saunders. They were faced by Eliza Vail and Anita Butcher. The match report says the men would love to play these two girls again and see if they would have a chance of winning. This time they lost 4/3.

Iain Robertson and Andy Williams felt no fear in playing against Linda Johnson  and Anita Butcher. The men managed to get a half, it seems despite the skill of one of their opponents in bouncing balls off the trees back into the middle of the fairway!

This game was a first for SGC as not only has Erica Klim  played well in her first season of in inter county games but she teed up with Ben Gliddon against the ladies pair of Claire Biggs and Liz Mettam. This game shed some light onto the SGC team score as Erica and Ben won by 3/2. Ben had a smile on his face all evening long…..

Out last for SGC was Paul Middleton and Mike Usher-Clark, who were charmed and beaten by Sandra Ford and Gwen (one putt) Cavill. The men had been 3 up after three but they were hauled in and the chance of a half went on the 18th to yet another of Gwen’s laser putts. So the ladies had this game 1 up.

The result for the Ladies on their chosen format was a resounding 5.5/2.5 win. However the men were the best of losers and as always enjoyed every aspect of this match with a level of gentility and fun for which we look forward.

SGC Skipper Andy Carter was graceful and charming to the ladies, confessing that he had been told off on the course for his effervescence.

Ladies Captain Sandra acknowledged the advantage the ladies had and offered the men the challenge of their opportunity to select the course for 2019 when the ladies would be the away team.

All in all a great day of fun, fellowship, mutual respect and a reminder that the accuracy of the ladies’ golf is never to be under estimated. We look forward to the match next year, and are looking at courses in the Himalayas for a male advantage.