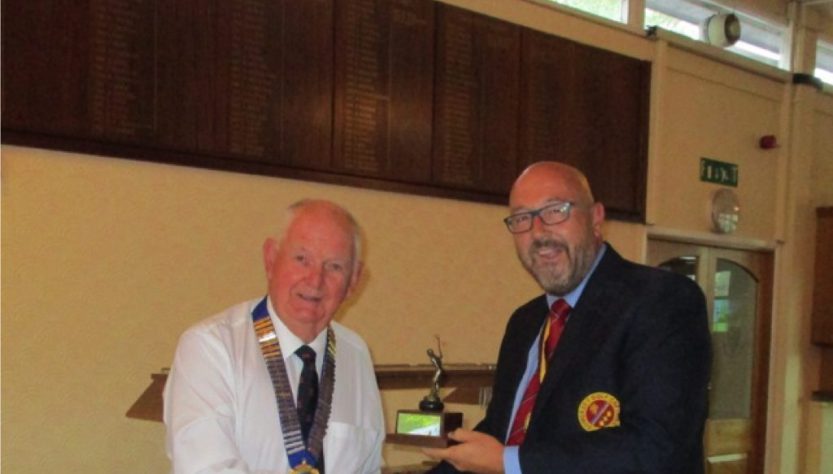 The dry sunny weather continued into July when South Wales Coast Golf Captains played host to Somerset Golf Captains at Llanwern Golf Club on Thursday 12th July. Like all golf courses, the fairways were rock hard, with the ball rolling for miles – which made it difficult to keep the ball on some sloping fairways ! All this made for some very enjoyable golf and some very interesting score lines!

In match one, Somerset Captain Andy Carter teamed up with Mark Moorfoot to play the South Wales Captain Mike Davies and his partner Llanwern Captain Colin Wood. Everyone had a great day on a challenging course. After five holes, Somerset were five down, and eventually lost 7&6! (In Wales the term ‘dog licence” is used for a 7&6 – the same as in England!

In match two, Bob Acland and Derek Hanson gained an early lead for Somerset and held on despite a strong mid-round surge from Tony Newton and John Critchley. A great match with great company, played in the right spirit and Somerset came though strongly in the end to win by 3&2. Overall score now 1-1.

Match three was very close with some high calibre golf. The Somerset pair of Ian Suttle and Malcolm Terry dove-tailed well to secure a 2&1 victory over John Linton and Tony Withnall.

In match four, Paul Binding was playing superbly like his old self alongside Somerset President Mike Usher-Clark. This game was nip and tuck but Somerset got 2 up and held on to win. A great game with several net birdies and two Welsh gentlemen Andrew Eveleigh & John Llewellyn. Overall score currently 3-1 to Somerset.

Match five saw George Davis & Jeff Saunders play against Tony Dobbs & Dilwyn Bull. A great game with great company and some very good golf. A great result for Somerset too by a margin of 9&7! Is that a record? Somerset now leading 4-1.

In match seven, Roy Parmiter and Chris Warcup played against Ray Hooper and Graham Bartley. Roy had played against Graham before so knew he was in for a tough match – which proved to be correct when South Wales won 4&3. When interviewed afterwards, Roy said “Dick Turpin is alive and well and living in Wales!”. Overall score now 4-3 to Somerset – everything resting on th4 last match!

In match eight, John Beer and Peter Preece had the pleasure of watching someone play the round of his life! Playing off a handicap of 5, Mike Smith was two under gross after 14 holes; and his partner Bill Clarke game in whenever needed. Somerset were always behind and shook hands on the 14th when South Wales won by 5&4.

So the overall match result was Somerset 4 – South Wales Coast 4! The draw meant that Somerset retained the trophy which they won last year at Burnham & Berrow.

Thank you to South Wales Coast captains for their warm welcome and hospitality and well played to everyone concerned.