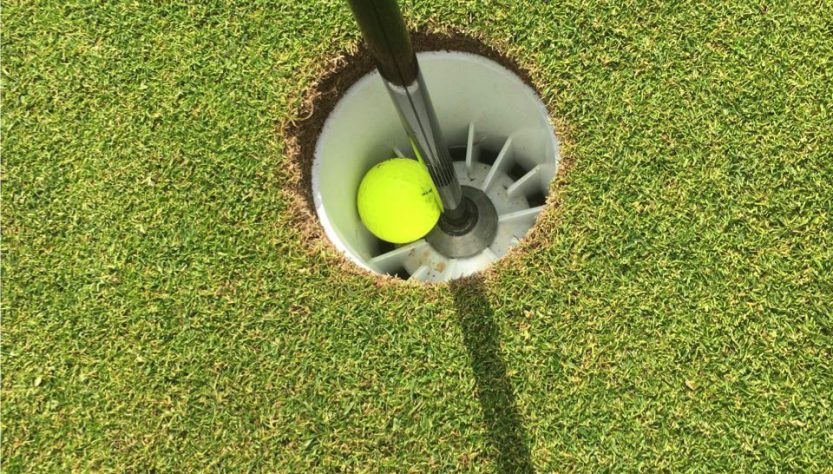 A hole-in-one for the South Wales Coast Captain was the highlight of the friendly encounter at Enmore Park Golf Club on Monday, the 8th of July.

John Linton hit a superb three wood on the 202 yard par 3 12th and watched as the ball missed the bunker on the right hand side; hit the green and rolled perfectly towards the flag; and then dropped in. Congratulations John !!! (shame that this was the “Nearest the pin” hole for Somerset and not for South Wales Coast).

We welcomed our friends from South Wales to Enmore Park on a warm and sunny day, with the golf course, as always, presented immaculately and the Enmore Park staff were superb in their hospitality.

Home captain Paul Martin welcomed both sets of teams to Enmore Park Golf Club and we were delighted to welcome ex-president Ken Hinchliffe who was able to join both teams for lunch and for the start of play..

In match one, skipper John Beer and Enmore Park Captain Paul Martin played against South Wales Coast vice-captain John Linton and his partner John Jones. On the first tee, John Linton announced that he had not yet won a match whilst playing for South Wales Coast, but (who knows ?)  today could be his day. This was a great game with superb company, and Somerset got off to a flying start with four gross birdies on the front eight, to be five up at the turn. But then South Wales Coast fought back (including the hole in one on the 12th) before Somerset ran out as victors, with a score of 3&2. Congratulations through gritted teeth from the South Wales coast pairing!!!

In match two, Mike Rossiter and Martin Rotheram played against Jeff Price and Mike Smith. Excellent company on the golf course and an excellent standard of play. Jeff price was brilliant – finishing four over gross with a handicap of 13! Somerset felt lucky to get away with a losing margin of only 5&4. Good crack was enjoyed by three guys from the UK and the Mexican bandit.

In match three, Malcolm Lloyd and Frank Ryan played against Dilwyn Bull and Graham Bartley. The course was excellent; the company was great; and the weather was wonderful. Somerset dovetailed nicely. South Wales made a slow start and then tailed off. The best team won with Somerset regarding a 5&4 victory.

In match four, Pete Amos and John Perkins played against Ray Hooper and David Bailey. In this great company. Somerset lost to two golfers on top form (although Pete suggested that John played them on his own!). The South Wales players had always wanted to play Enmore Park and it didn’t disappoint and they secured a 5&4 victory.

In match five, Stephen Parker and Richard Dore played against Tony Dobbs and Graham Smith. A great game on a great course with great company. This match was ‘nip and tuck’ all the way and a half at the end was a fair result.

In match seven,  Rob Hardy and Phil King played against Bill Morse and Viv Morgan. This group enjoyed playing a great course in wonderful condition. All the players enjoyed each other’s company and agreed it was nice to finish with honours even. The match was halved.

In match eight, Michael Bovingdon and Bob Acland played against Bill Clark and Michael Kenny. This group had a great day with Somerset running out as a victors by a score of 3&2. Michael enjoyed the good company but felt it was a shame about his partner’s dress after Vice President Bob Acland announced he had forgotten to bring a change of clothes. He had arrived without a shirt jacket or tie.

This was the 24th fixture between the two counties and today’s victory meant that Somerset have now won 10 times; South Wales Coast 8 times;  with 6 matches halved.

After the golf, the players enjoyed the warm sunshine on the balcony overlooking the 18th green before sitting down to a delicious meal. At the start of his speech, John Beer congratulating John Linton on his hole-in-one;  and thanked him for providing port so generously for everyone at the meal. John also welcomed Paul Martin and Mark Tidcombe who were playing the first matches for Somerset Golf Captains. John also shared his memories of playing with ex Enmore captain Charlie Carr and then proposed a toast to South Wales Coast Golf Captains.

In response, John Linton made a very witty and entertaining speech which was well received by both teams, including the joke about the frozen cows!!!  John also presented a book called “L’escargot” to John Jones, and then proposed a toast to Somerset Golf Captains.

Both teams look forward to next year’s fixture which will be held at Pyle and Kenfig Golf Club on the silver anniversary of this fixture.

Thanks also to our match manager Bob Acland