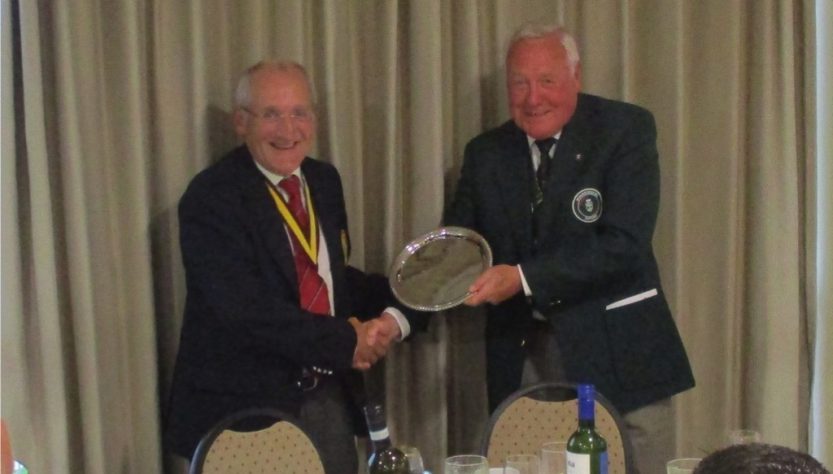 The Vale Golf and Country Club (Pershore) was the venue for the 18th encounter between Somerset and Worcestershire Golf Captains. For Somerset, the journey to Pershore included pouring rain, closed roads, detours and accidents. And when we arrived, we found that the course was closed due to the overnight rain – and both bars were occupied by the ladies section who had not been able to go out in the conditions! However, the head greenkeeper reassured us that his team would have the course ready for us to play at 1:15 pm and that is exactly what happened. No one could remember the last time we had the course closed before we arrived, and opened for our exclusive use in an inter-county match. To speed things up even further, matches 1-4 went off the 1st tee, and matches 5-8 went off the 10thtee. The afternoon continued to be cloudy and misty but thankfully mostly dry. Due to some form of mix-up, Somerset were one player short and match manager Steve Butterfield volunteered to do the decent thing, play as a singleton.

In match one, Somerset captain John Beer and his partner Keri Allchurch played against the Worcestershire Captain Kevin Woodham and the local club captain Paul Chadwick. This was a very enjoyable game on an excellent golf course. Somerset got off to a flying start and found themselves four up after four! The Worcestershire pair came back to be only one down after 13. Then John’s putter (borrowed from Jeff Saunders?) came to life with an unlikely par on 14, and a birdie on 16. Another par four on 17 was good enough for a 3&1 win . Kerry and John dovetailed well but John’s putter and his new,lucky SGC cap made all the difference.

In match two, Somerset Vice-President Bob Acland teamed up with Derek Hanson to play against Worcestershire President Brian Peplow and his partner Trevor Sidwell. This was an excellent game with great company played on a very good golf course. Somerset running out as winners 3&2.

In match three, Jeff Saunders and Stuart Mann played against Roy Everett and Mike Field. They were great company on a very nice course (well worth the journey), but Worcestershire won 2&1.

In match four, Rob Hardy and Glyn Sewell played against Brian Stokes and Mark Read. This was an enjoyable afternoon with good company and the Somerset team gelled as a partnership and managed a good win by the score of 3&2. A good day out.

In match five, Geoff Rooke and Murray Parsons played against Brian Morris and Harry Goodwin. The Worcestershire pair were very good company and very good players – but Murray will need ear defenders if he has to play with Geoff Rooke again! Somerset winning 4&2.

In match six ,Rob Hirons was partnered by Marcus Woodward,  who was making his debut for Somerset Golf Captains. They were playing against John Eastoe and Garman Ingman. This was a close game at halfway but Somerset then won four of the next six holes with some good golf. The Worcestershire guys were a real pleasure to play with. Somerset winning by 5&3.

In match seven,  Trevor Watts and Rob Ford played against Mike Abraham and Ian Jones. This was a very close game with great company. And sportsmanship to the fore. The course was in was in good condition despite the weather but Worcestershire held on to win 1 up.

In March 8 Stephen Butterfield played against Terry Tansley and Mike Fowle, who were great company. However two versus one is always difficult when giving shots away. Steven’s putter was very cold today and he maintains they put “cling film” over the holes ! (PS Peter Shilton is a past member of the Vale Golf and Country Club). Worcestershire won this match by 5&3.

So the overall result was a victory for Somerset with a score of five matches to three. Well done Somerset!

The banter in the bar afterwards was evidence of the friendship which existed between the two teams, who then enjoyed a delicious meal in a very comfortable clubhouse. Worcestershire Captain Kevin Woodham gave a very witty and entertaining speech. In reply, John Beer thanked Worcestershire for their hospitality and welcome and then congratulated debutant Marcus Woodward who was preparing to get married a few days later. Thanks to Rob Ford, John was also able to refer to the record of fixtures between the two teams. The first match was played in 2002 at Wells Golf Club with Somerset winning 6 – 2 and that remains the only time Somerset have one on home territory! And up until today they had also only won once away, in 2007 at Fulford Heath But after today’s victory the records show Somerset now had 3 wins Worcestershire have 12 wins with 3 games halved.

We would also like to thank Stephen Butterfield for taking over the duties as match manager at short notice and for his superb organisation before and during the day.