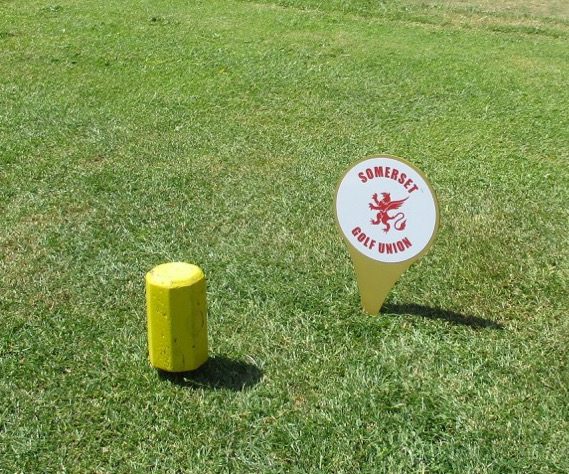 A warm and sunny day greeted the two teams at Weston-Super-Mare Golf Club, as the Somerset Golf Union Executive and Somerset Golf Captains completed for the Metcliffe Salver for the 21st time. The Trophy was jointly donated by Rick Metcalfe and Ken Hinchliffe in 1999. The course was running hard and fast, but a significant wind added extra difficulty to playing the course. Typical links golf!

In match two, Clive Stilwell & Stephen Rowlands played against Somerset County Captain Jamie Ward & Barry Lake. The match was also halved but everyone enjoyed the fabulous company. They even found out that Barry had a thing for netball players!

In match three, Bob Acland & Mark Moorfoot played against Ian Poole & John Parker. This was a very close match; all square after nine and neither side ever more than one up. Mark won the 17th for Somerset to go one up and the Captains held on to half the 18th. A great match with the Captains finishing one up at the end.

In match four, Jim Scott & David Bate played against two regulars for Somerset Golf Captains:  Stephen Butterfield & John Perkins. The Captains lost by 3&2 but the company was great, and the course was running fast.

So with the first four matches in, the score was SGU 2 points, SGC 2 points – all to play for.

In match five,  Paul Chesney & John Paterson played against immediate past Captain of Captains Andy Carter & Kev Perdy. The two ex-Taunton Vale  and life long Villa fans gelled and were never behind; 3 up at the turn including a birdie for Paul on the 8th!. They also won 11, 12 and 13 to secure a winning margin of 6&5. JP holed in one on the 5th– but it was the second marker post hole which runs between the 5thand 6thholes.

Another comfortable win followed in match six, where Matt Baker & Rob Hirons played against another two past captains:  Derek Hanson & Paul Middleton. At times it seemed like they were the Red Arrows but they always met up on the greens. The course was playing short and the Captains put the opposition to the sword to secure a 5&4 victory.

However, the biggest winning margin came in match seven where Marcus Woodward & Geoff Rooke defeated  Norman Banfield & Richard Dix by 7&5. The game started close but the Somerset captains dovetailed well and won a number of holes in a row against very good company.

Some consolation for the SGU in the final match where Tim Nicholls & Mike Poole played against John Williams & Martin Hawkins. Martin and John were simply too good ! Great company though so they can be forgiven for inflicting a 6&5 defeat on the SGC pairing.

So the strong performances by the teams in the middle of the pack secured an overall victory for Somerset Golf captains by the margin of 5-3.

The players enjoyed the banter in the warm sunshine on the patio before going inside for a delicious meal and wine generously provided by the home team – the SGU.

In his speech, Captain John Beer welcomed both sets of players and drew attention to the unique gathering which included the President of the SGU, the County Captain, the County Seniors Captain, and also the President of the South West Counties Golf Association, Stephen Butterfield. Perhaps we missed a trick by not including the President elect of England Golf: Graham Yates,  who is also a former President of the SGU and a member of Somerset Golf Captains. John paid tribute to the condition of the course and the catering and bar service. The nearest the pin on the 16thfor the SGU was presented to Paul Middleton. The Somerset Golf Captains then toasted the Somerest Golf Union.

In response, President Geoff Ogden thanked everyone for taking part before presenting the nearest the pin prize on the 15thto Past captain Paul Chesney. Geoff then announced the result and presented the Metcliffe Salver to the winning captain, before proposing a toast to the Somerset Golf Captains.

We would like to thank out match manager for this event Jim Scott.