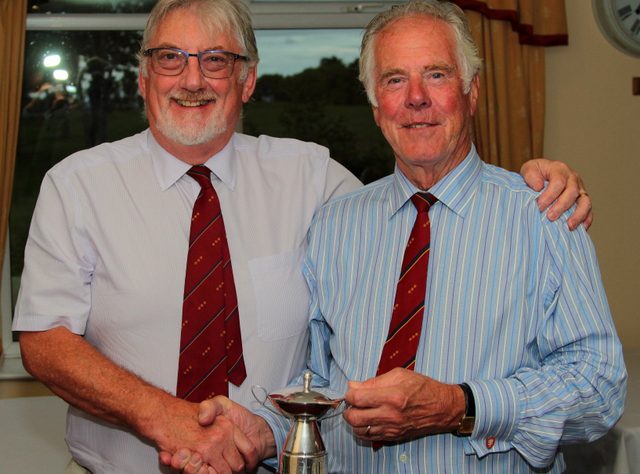 The President’s Cup was jointly given by then President Harry Bowles and Trevor Jenkins, in 2001.

It is played for annually with a strict participation list only of those who have been Captain of Captains of Somerset Golf Captains.

The match is organised by and occurs at the home club of the SGC President, currently Mike Usher-Clark of Worlebury Golf Club.

Apologies were received from

The Captains gathered for lunch, our flag was fluttering in the steady breeze, the course was greening up,the sun was out and the newly polished cup returned by last year’s winner Chris Warcup, was on everybody’s mind.

The scores were a good average , not outstanding and the result a secret, until the end of Dinner.

Everyone loves to enjoy the banter and the stories of unique moments from their special year. They were seated in year of captaincy order with George Davis, the senior – although he says he was still at school  then.

After the baby Captain, Andy Carter had proposed the toast to “Somerset Golf Captains”, the Cup winner could be announced.

Mike Usher-Clark announced the scores from the bottom (his) up and at the top of the pile came none other than multiple previous winner – George Davis.