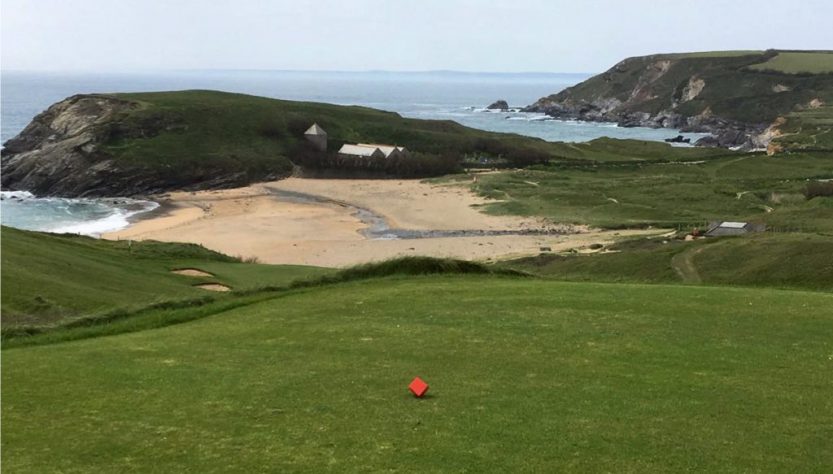 “CORNWALL AWAY” is always a highlight of the Somerset Golf Captains’ calendar and this year was no exception. We looked forward to returning to Mullion Golf Club on a sunny warm day with only light winds. Perfect golfing weather. However, we soon realised how serious Cornwall were about retaining the trophy when the Captain for the day announced we would be playing off white tees, and …. a Cornwall team which contained seven Mullion Captains!

In match one, Somerset Captain John Beer and his partner Mike Snaith played against Cornwall Vice-Captain Gary Faraway and Mullion Club Captain Dale Wilson. A great game of golf played in a wonderful spirit. Somerset won the first but Cornwall were one up after seven holes and the next 11 holes were all halved on a magnificent course. Cornwall one up after 18.

In match two, Glyn Sewell and Rob Ford played against John Bishop and Mullion past captain Mal Dickinson. This was a very good game with the home team using their course knowledge particularly well to secure a 2 & 1 victory.

In match three, Dave Rich and Tony Taylor played against Dickie Dickinson and Mike Martin. The Cornwall players had birdies with Somerset questioning some of their “misleading” information, but they were very sociable! No age concessions were given as Cornwall again 2 & 1.

In match four, Stephen Butterfield and Mike Poole played against Dave Dungale and Mullion past captain Mike Pamphilon. Somerset were well and truly beaten by Mike and Pedro the burglar! Course and company were great; even the weather was fine. Stephen and Mike had a great afternoon but lost 5&4.

In match 6, Chris Warcup & Jeff Saunders played against the Mullion pairing of past captains Andrew London and Beau Meagor. Very Good company and great course. The Somerset pair look forward to returning but on this occasion were 2 down at the end of the match.

In match 7, Vice-President (and match manager) Bob Acland and John Whitewood played against Adrian Roberts and John Crowson. A lovely course with spectacular views; good company and another good win for the home team, who ran out victorious by 5 & 4.

In match 8,  treasurer David Andow played with secretary Jim Scott played against Dave Perry and David Crow. A great match on a wonderful course:  the Cornish pixies helped the ball into the hole for an Eagle to make a great end to the day. Cornwall again victorious by 4 & 3.

And so history was made when Cornwall whitewashed Somerset and won the match by the overwhelming margin of 8-0 !

Many, many congratulations to Cornwall, who were deserved winners and so retained the shield which they won last year in Somerset.

Both teams enjoyed socialising in the sunshine after the game, and the chef produced an excellent meal of pork loin in a mushroom sauce with a choice of desserts. Both captains complimented Mullion Golf Club on the condition of the course and the quality of the food and catering.

Somerset captain John Beer repeated the sentiments he expressed at the Six Counties, when he pointed out that “it’s not all about the winning” and “we are happy to be here”. The result means that Somerset saved some money on engraving costs and Andy Carter’s win/lose ratio from last year is looking quite safe at this point of the season!!!

We would like to thank match manager Bob Acland for his organisation and assistance.

We look forward to renewing our friendship with Cornwall Golf Captains next year in Somerset.