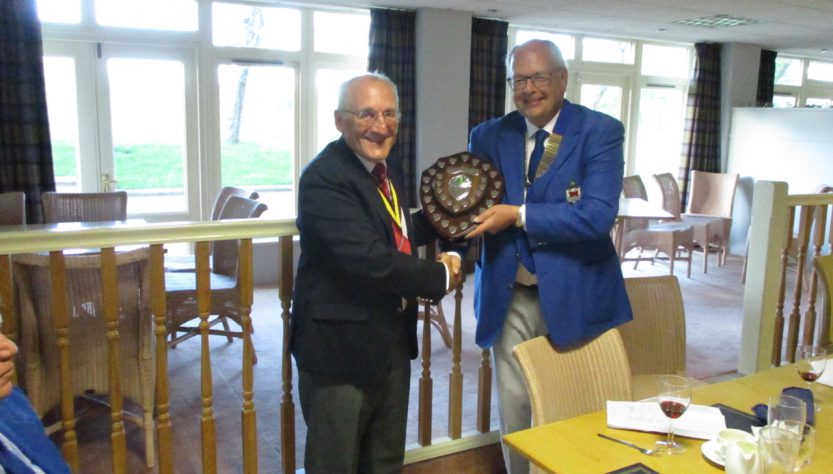 Somerset Golf Captains welcomed Oxfordshire Golf Captains to Long Sutton Golf Club on 25 April 2019 for the 51st match in this series. The weather conditions were windy and cloudy with sunny spells and only light rain at the beginning.

In match one, captain John Beer played with Long Sutton member Bill Campbell against Oxfordshire captain Chris Spearing and David Jones. The Oxfordshire pairing were five up after 10, before Somerset fought back to being only one down with two to play. But David then birdied the 17th to secure a two and one victory for Oxfordshire. Great company and a great game of golf.

In match two,  Stephen Butterfield and Max Putnam played against Martin Hawkins and Graham Robinson. This was a great game which really should have been a halved match. It was “ding dong” all the way to the last where Somerset sneaked a win, when Max parred the 18th hole (from the trees on the left).

In match three, Ian Robertson and Stuart Mason played against David Hole and Peter Walton. This was a very good game played with great spirit and banter. The Oxford pair were just too strong for Somerset, who lost by four and three.

In match four, Nigel Phillips and Mike Nash played against Danny Fois and Henry Willis. On an excellent day there was some very good golf played. The problem was the Oxfordshire they played all the good golf! The company was great but Somerset lost six and five.

So after four matches, the score was Somerset 1 – Oxfordshire 3.

In match 5, Jim Allan and Keri Allchurch were five up after seven holes against Mike Pennick and Brian Maddison. And then blew it! Mike putted like a demon to secure a great comeback and an honourable half.

In match 6, Rob Hirons and Neil Whisler played against Keith Willis and Ian Allison. Somerset snatched victory from the jaws of defeat to secure a win by being 2 up. Rob Hirons is now known as the putting god!

In match 7, Mike Rossiter and Simon Waddington played against Rob Daniels and Alan Harries. These golfers missed out on the nearest the pin prize for both home and away teams – and by inches. Some excellent back-to-back birdies secured a win by four and three for Somerset. An enjoyable game with great company.

So after seven matches with one match left on the course the score was Somerset 3 1/2 Oxfordshire 3 1/2.

In March 8,  Mike Snaith and Roy Parmiter played against John Rees and Ollie Bowden. John and Ollie dovetailed well together and outplayed the Somerset pair on a windy day. The match was played in good spirit with good company. The Oxfordshire pair ran out the winners by 3&2.

So the overall result was Somerset 3.5  – Oxfordshire 4 .5 which means Oxfordshire have now won 26 games between the two counties; with nine draws. And 19 wins for Somerset.

Club captain Paul Wills joined us for dinner and everyone congratulated Long Sutton on their hospitality and the condition of the course.

Thanks also to the match manager for Somerset Roy Parmiter

Oxforshire Captain Chris Pearing was kind enough to email the following comments: “I am just writing to  thank you, on behalf of Oxfordshire Golf Captains, for a wonderful day yesterday at Long Sutton. The course was as green as any I have seen in the last year and presented a real golf challenge. John Beer and Bill Campbell were excellent company, and our match was played in a fantastic spirit as, I’m sure, were all the others. A look around the dining room was enough to know that everyone thoroughly enjoyed themselves, particularly after such a splendid dinner.”

Thanks to everyone for taking part, and the next fixture is against Cornwall at Mullion next Tuesday.