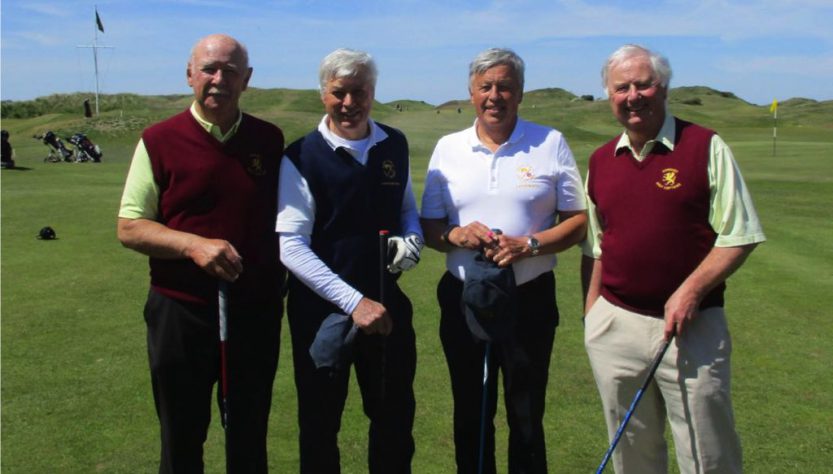 On Monday 13th May, Burnham & Berrow Golf Course was basked in sunshine for the match between Somerset Captains & Hampshire Captains.

A most enjoyable lunch provided by the Golf Club was enjoyed by all. Past President Ken Hinchcliff ,joined us and we wish him well.

Match 1: Steve Butterfield & Peter Amos (Past Captain of Burnham) set the tone of the day with 4 & 2 win over Shane Dickson & Brian Mortimore.

Match 2 : Matt Baker & Derek Hanson in a tight match with Tony Haskins & Ian Riches, managed to half their match –  a good introduction to Somerset Captains Golf for Matt who was making his debut for SGC.

Match 3 : Tim Nicholls & Geoff Rooke were 2 down at halfway to Mike Kelly & Idris Purnell .The SGC pairing fought gallantly on the back nine, but succumbed to defeat on the last hole to lose 1 down.

Match 4 : Jim Scott & Mike Rossiter in a most enjoyable match against Hampshire match manager Mike Kelly and John Aspel, managed a 6&5 win despite Mike having to give a shot on most holes.

Match 6 : John Whitewood & Chris Warcup both of whom were called up by match manager Jim Scott as replacements, kept up their winning form and won 2&1

An excellent dinner was provided by Burnham & Berrow catering staff, we wish to thank them for their efforts.

Past President Trevor Jenkins joined us for the meal, Trevor donated the trophy for this fixture and it was with great pleasure that he presented the trophy to Steve Butterfield Somerset Captain for the day.