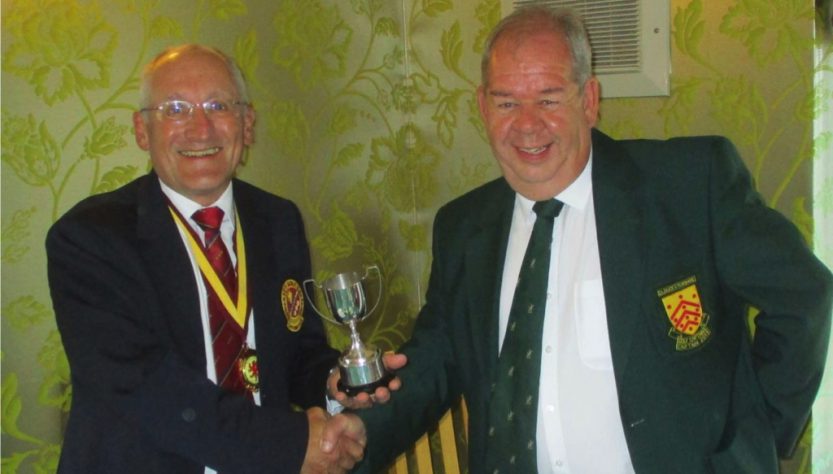 Stinchcombe Hill Golf Club was the venue for the annual fixture between Somerset Golf Captains and Gloucestershire Golf Captains on Monday the 3rd of June 2019. The weather was sunny, but then overcast with a stiff swirling wind on this exposed moorland course perched on common ground high above Dursley.

In match one, old friends John Beer and Paul Chesney were soon under the cosh against Gloucestershire captain Paul Drinkwater and his partner Nick Broady. Nick birded the first and Paul used his stroke at the 2nd to go two up! However the ex-Taunton Vale pair steadied the ship and then won six holes in a row, including seven straight pars, from the 5th to go four up. They managed to hold the lead and a par at the 14th gave them a 5&4 victory.

In match two, Phil Barrett and Clive Stilwell played against Ian Cornwell and Tony Davies. Ian and Tony’s buggy steered them into an early lead which was not threatened until the final few holes. Clive and Phil rallied, but both missed birdie putts on the final green to lose by one hole. A fine match.

In match three, Murray Parsons and Bob Smith played against Sam Collins and David Soar. Sam and David’s consistent play got them off to a very solid start on the tough opening holes. Somehow Murray and Bob clawed back the deficit, and by dint of some good putts managed to level the scores on the 14th. A brilliant birdie by Murray on 15 helped Somerset to shade it,  and then run out winners by a margin of 2&1.

In match four,  Mike Newell and Kev Osman played against Keith Hanson and Eric Milard. Mike and debutant Kev got off to a strong start, birdieing the first, and consistently winning holes on the front nine. Keith and Eric threatened to come back early on the back nine but it was snuffed out by Kev’s firepower off the tee, and Mike’s accuracy around the green. Somerset won 5&3.

In match five, Roger Gazzard and Rich Bartin played against Robin Hannigan and Mark Anderson. This was a very tight but enjoyable match, never more than one hole in it all the way round. The match ended in an honourable half for both teams.

In match 6,  Erica Klim and debutant John Shakesby played against Morris Little and Jeremy Elliot. This was a very enjoyable match until Somerset lost the 17th and 18th to go from 1 up to 1 down at the end.

In match seven, match manager John Chillington and Nick Bye played Jim Cushlby and David Matthews. Very enjoyable match, albeit a bit one-sided, but good company throughout. Somerset never recovered from a slow start against a pairing really on their game. Gloucestershire winning by 6&4.

In match 8,  Mike Poole and Mark Moorfoot played against Steve Yemm and David Stowell. This match was played in a good spirit with great banter. There was nothing in it until the 16th with Somerset one up. Somerset tried to give the 18th away but Gloucestershire declined to take advantage and Somerset came out the winners two up.

So, at the end of a thoroughly enjoyable match, Somerset retained the “Somerglo” trophy by recording a victory margin of 4.5 to 3.5. Gloucestershire Secreatray Tony Davis recalled that the current trophy replaced the original “Somerglo” trophy after it was ‘bent’ by accident.

Gloucestershire Captain Paul Drinkwater gave a very entertaining speech paying compliments to the golf club and the catering. In response John Beer thanked Gloucestershire for their hospitality and congratulated match manager John Chillington on his organisation, and on his birthday! John also welcomed debutants Kev Osman and John Shakesby in their first appearance for Somerset Golf Captains and looked forward to seeing them again in future matches.

John reminded both teams that Gloucestershire Golf Captains were originally founded in 1953 following a meeting at Stinchcombe Hill, and their founding President was local member Sir Percy Lister.

(If you click on a thumbnail below, you will see the original photo; or contact us and we will send you the original