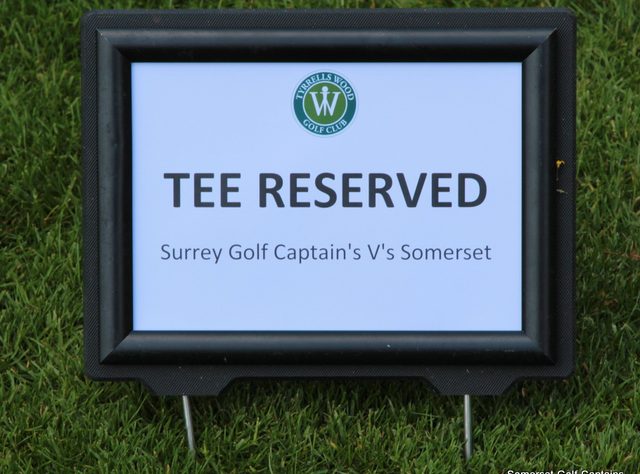 Tyrrells Wood Golf Club was the venue for the 2019 fixture between Surrey Golf Captains and Somerset Golf Captains, played on the 6thJune. Set in rolling Surrey countryside, and designed in 1922 by five times Open champion James Braid, Tyrrells Wood is a beautifully presented, undulating parkland course; surrounding a magnificent clubhouse, which is also a Grade II listed building. History records that James Braid was paid the princely sum of £11.02 for his services in designing the course.

The early morning rain had stopped when the Somerset contingent arrived at lunchtime and the afternoon turned into a warm and pleasant day.

Matches one to four commenced on the first tee; and matches five to eight started on the 10th tee.

In match one Somerset Captain John Beer and George Davis played against Surrey Captain Richard Kennett and his partner Chris Luke, who (as well as being a past captain of Tyrrells Wood) is also currently the club chairman. This was a very good match played on a superb course which was in excellent condition against two real gentleman. Richard took full advantage of his shots and Chris’ local knowledge secured a comfortable win for Surrey by the margin of 4&3.

In match two, Stephen Butterfield and Bill Campbell played against Surrey President Ian Snell and his partner Alan Tickner, who was also the match manager for Surrey. The putters saved the day for Somerset who were three up at the turn. Surrey fought back to one down after 14, but Somerset stabilised to eventually win by a margin of 3&2.

In match three, Paul Hucker and Murray Parsons played against Steve Wiltshire and Daniel Flower. This was a very close match with never more than one hole in it throughout. Paul Hucker came in late to win the match on the 18th green and secure a victory for Somerset by the margin of 1 up.

In match four, the Mendip pairing of Jim Scott and Tony Taylor played against Paul Gardiner and David Powell. It was a lovely golf course in a wonderful setting. The players commented that James Braid surpassed himself with the slopes on the greens. Somerset were ahead throughout the game but the Surrey pair fought back to secure a half.

In match five, Rob Ford and David Andow played against Keith Tollick and his partner Mike. The Surrey pair confused the Somerset pair on the first tee by making them play off the whites – and things didn’t improve much after that! The match was great fun but Surrey ran out as victors by the margin of 4&2.

In match six, Jeff Saunders and Geoff Rooke played against Jim Butcher and David Bigg. This match was played in the true spirit of golf and Jeff Saunders was on fire! Geoff Rooke was happy to watch and mark the card, as Somerset ran out victorious by the margin of 4&3.

In match seven, Nick Prince and Rob Hirons played against Trevor Tye and David Yabsley. Both teams thoroughly enjoyed the afternoon which resulted in a hard fought half for both sides.

In match eight,  Somerset President (and match manager) Mike Usher-Clark with his partner Bob Acland played against Martin Hobbs and Charlie Rankin. The Somerset pair were four down before they got over the car journey (or so they said). They then fought back to 1 down; and an honourable half on the 18th gave a victory to the Surrey pair by the same margin. A great course and great company played in the true spirit of golf.

So, the match score ended with “Surrey 4 & Somerset 4”. The match was halved and Somerset therefore retained the trophy which they had won in the previous year.

After the last pair had changed,  both teams sat down for a magnificent three course dinner in the superb surroundings of the James Braid room. The banter and atmosphere in the room gave evidence to the success of the event and the friendship which exists between the players on both sides.

Somerset Captain John Beer thanked the  Surrey Captains for their superb generosity and the warmth of the welcome, and went on to compliment Tyrrells Wood Golf Club on the magnificent condition of the course and the quality of the food.

Special thanks also to our match manager Mike Usher-Clark.

According to the engravings on the trophy, Somerset have now won seven matches; Surrey have won five matches; and five have been halved (including today’s match) since the first fixture in 2003. However, confusion surrounds the result of the 2017 fixture played at West Hill Golf Club. The trophy engraving records a victory for Somerset, but the Surrey website and members handbook records a victory for Surrey!

As always when visiting Surrey, Somerset stay over night and play a competition among the tour party. The venue for this was again Sutton Green, but the promised horrible weather had arrived, with heavy overnight rain and more looking imminent.

Breakfast had been arranged at Sutton, courtesy of Eddie Wheeler the Surrey Captains’ Secretary.

There is a trophy for this second day event, the Muccy Cup, presented by current SGC President, Mike Usher-Clark.

Rather than no competition, he organised a putting Competition for the trophy. The hole was a wine chiller and everyone used the same putter for fairness.

It looked as it a play off would be needed as several players were equal. However continuing his blistering form from the day before, Jeff Saunders beat the field and holds the trophy for the next two years.