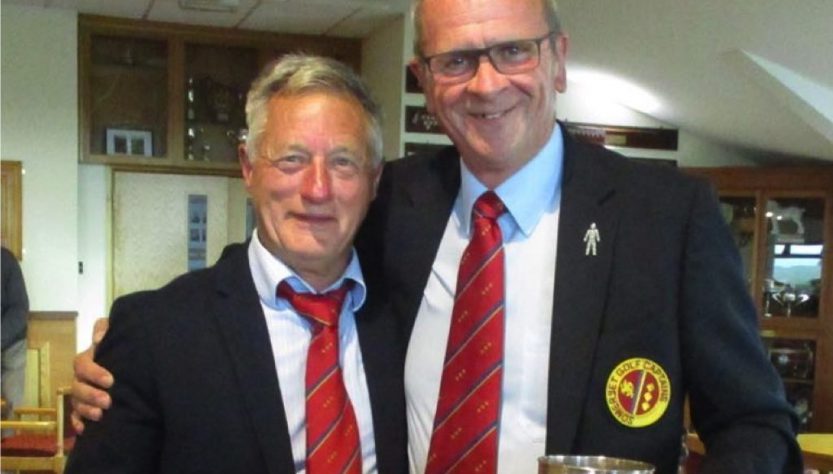 The “Four Counties” golf tournament is an annual competition between Somerset, Wiltshire, Dorset, and Berkshire. The venue this year was the West Wilts Golf Club and the weather conditions were cloudy but mostly dry with only a spot of drizzle during the afternoon. The course was in great condition after the recent rain.

The format for the competition is a stableford four ball better-ball, with six pairs from each county. Played off the white tees with full handicap (maximum 18), the best five scores from each county are added together to find the winner, with the sixth score used in the event of a tie.

First off for Somerset were Captain John Beer and Keri Allchurch, who  had a lovely game of golf with two gentlemen from Dorset; Dorset Captain Bill Kent and Dorset Secretary Nigel Mobbs. The skipper played exceptionally well despite carrying his partner who has left his putter in the deep freeze overnight! Despite missing several short putts, the first pair recorded 41 points.

Clive Stilwell and Mike Rossiter enjoyed a great fourball including Dave Picton and Derek Grimes from Dorset. The group enjoyed the course and each other’s company. A hole never passed without a Rossiter joke – nothing new there! Clive and Mike dovetailed well and both delivered some three-pointers, plus Mike’s birdie worth four points. With Clive playing off five and Mike playing off six, the teams score of 45 points reflected some outstanding golf.

Stephen Butterfield and Chris Warcup enjoyed good company in the presence of Pete Samuel and Brian Hansford. Steve really enjoyed pushing his trolley and keeping his partner happy. They dovetailed well but couldn’t sink a putt, finishing with a score of 38 points.

Andy Carter teamed up with late replacement Peter Owen and had a great game alongside Alan Hebditch and Pat Crane. The course was good and the weather was okay, but the company was superb! Peter did the damage and Andy carried his bag. This was a closely fought match with the Dorset pair scoring 41 but Somerset were better (well Peter was!) with a score of 44 points.

Jim Scott and Mike Snaith played against David Thomas and David Kimberly. This was a good afternoon of golf and Somerset tried to ensure that they scored more than 36 points to contribute to the team score. They finished with 37 including a chip-in from Jim.

So the overall team score for Somerset was 207. Last year Wiltshire won the event with 195.

But in 2019 the scores were as follows

Congratulations to Wiltshire who retained the trophy which they won last year. This was a great score with each team contributing an average of 42.5 points. Commiserations to the Somerset team who now finished second in the ‘Four counties’ alongside the second place finish in the ‘Six counties’ earlier at Saunton.

Before presenting the prizes, Colin Tushingham from Berkshire reminded Captains of the origins and history of this competition. It started when Derek Bryant from Berkshire and Trevor Jenkins from Somerset tried to arrange a fixture – but couldn’t fit one into their schedules. So Derek and Trevor agreed this inter-county format instead. The former Berkshire captain Tom Sherry presented the trophy in 1984. The trophy is named after  Sid Hoare who was a great benefactor of Berkshire Golf Captains. Sid was also the sales director of Brooke Bond PG and his claim to fame were the famous “PG Tips” chimp adverts. It is for this reason that the trophy takes the form of a tea caddy – which is accompanied each year by a packet of PG loose leaf tea. Indeed on the first occasion the trophy was filled with tea! The individual prices were made up especially for the competition.

We would like to thank Wiltshire Golf Captains and West Wilts Golf Club for their superb organisation and hospitality. The Somerset team had a great day and we look forward to next year’s event which will be played on the 18th of June 2020 at the Temple Golf Club in Berkshire.