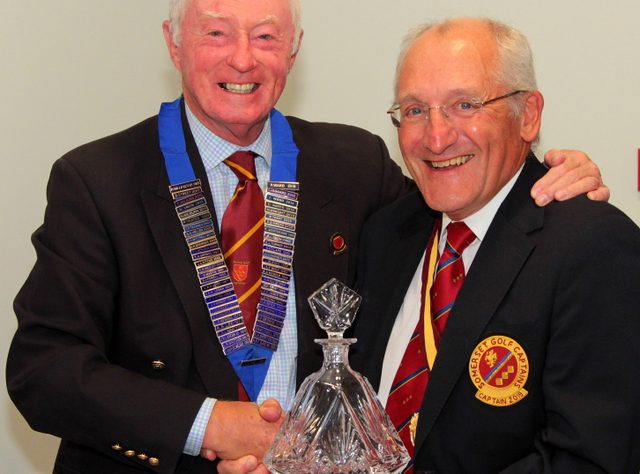 The last inter county match of the season was against Sussex and played at Taunton and Pickeridge Golf Club.

Initially the weather was not too promising and as can be seen from the photos, many players were well wrapped up on the first tee.

However the sun  came out and provided lovely weather  for the visitors.

in this match, Matt Baker and Steve Parker for Somerset came in 6/5 winners over Sussex President Ian Wood and Richard Jays. It seems Matt “turned up” on the 7th and then played par golf. They all thought the course was in great condition and had “great fun”

Roger Magor and Derek Hanson came to the tee next, and took on Peter Ward and Andy Ploughright of Sussex. This game was enjoyed by all , nothing remarkable occurred and Sussex won 2 up.

Roger Gazzard and Jeff Saunders were the next Somerset pair and found themselves matched against Mitch Clark and Gary Ham. This game was halved and both teams thought this was a fair result.

John Chillington and Glyn Sewell came out at five  for Somerset and their opponents were Ian Potter and Dave Wilkins. It seems that a little local knowledge and some favorable bounces made the difference allowing the Somerset boys to win 3/2 in an otherwise close match.

Max Putnam and Ben Gliddon for Somerset then took on Joe Augillar and Derek May. It seems Max shouldered the greater part of the burden for Somerset, especially with 5 handicapper Joe in the opposition. However after hanging on, the Sussex boys pulled away to win 3/2

Rob Fear and Colin Mantle for Somerset matched themselves against Nigel Waites and Brian Street for Sussex. The match report unusually describes the game as a “blood bath”. This cryptic  description is then qualified by a score line of a win for Sussex by one hole.

The last players for Somerset was Chris Warcup and Somerset President, Mike Usher-Clark. Their opponents were Andy Lamb and Neil Smith. This game had it all. Medical excuses galore and Neil with a bucket of shots he hardly needed. Once he was near the green he finished like a pro. The Sussex boys got to 5 up, then were pulled back to 2 up, but surged again, powered by Andy’s prodigious hitting to a 4/3 win.

Thus the last game decided the overall result and Sussex had won by 4.5 to 3.5

The club house was full of the special bon homie that these encounters provide.

The test cricket was on the lounge television and the rapt attention showed that golfers are real sports fans.

Dinner was a sumptuous carvery and then to the speeches.

Captain of Captains for Somerset, John Beer was wistful as this was his last inter county match. Clearly the first game had been full of fun which continued to the dinner table.

John presented Joe Auguilar with the nearest the pin on the 6th for the visitors.

Phil Williamson, the Sussex Captain, followed in like vein and both had entertained the players well.

Phil presented the nearest the pin on the 16th to the closest Somerset player, local Captain in his year of office John Godley.

John was so delighted that not only did he accept, he made another speech.

Finally, the trophy was presented to Sussex, to round off a wonderful day of captain’s golf.