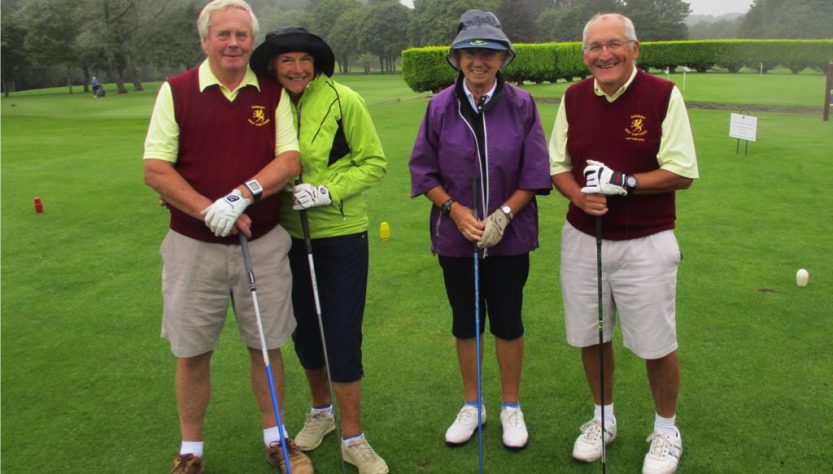 Somerset Golf Captains played the annual match against the Somerset Ladies Past Captains Association at Wells Golf Club on Tuesday, the 3rd of September. A change in the weather meant that the early starters began in drizzle and light rain, but the conditions improved later in the day to provide a cool and dry afternoon.

The format for this particular match is “Stableford 4BBB Matchplay”; ie

In match one, Somerset Captain John Beer and Wells member Stuart Mann played against the Ladies’ Captain Gwen Cavill and Leslie Organ. This was a great game –  full of fun and laughter. Stuart took full advantage of his local knowledge and holed several long putts. The match was all square after eight, but then Somerset Golf Captains won three holes in a row and managed to stay in front to secure a 4&3 win.

In match two, Peter Owen and Ben Gliddon played against Terina Parker and Eliza Vail. A few lucky bounces made all the difference in this competitive game, which was much enjoyed by all concerned. Somerset thank their opponents, but secured another victory by the margin of 4&3.

In match three, Jeff Saunders and Geoff Rooke played against Lyn Gridley and Di Yates. This was a great game with good company played in the true spirit of the game. Well played to the ladies who won by 2&1.

In match four Ian Suttle and Rob Ford played against Carole Paterson and Heather Saxton. This was a very competitive match until the ladies tired towards the end. Somerset Golf Captains were three up with two to play.

In match five, Roy Schubert and Marcus Woodward played against Sally Dymock and Saybria Sims. Roy and Marcus had a very close game which was up and down the whole way round. All square on the 16th tee, but Somerset won the next two holes to win by 2&1. The ladies played very well and in an excellent spirit.

In match six, Andy Williams and Mike Snaith played against SLPCA Chairman Sandra Ford and Denise Burton. The Somerset Captains had a wonderful match which was very tight until the 15th hole. Everybody played some good golf and the final score of 4&2 did not reflect the close match amongst good company.

In match seven, David Andow and Bob Acland played against Claire Biggs and Yvonne Bate. David says Bob should be reprimanded for ungentlemanly behaviour having scored too well on the front nine! Lovely company and a great game and good memories but another narrow win for Somerset Golf Captains.

In match eight, Tim Nicholls and John Paterson played against Faye Galley and Virginia Suttle. This was a great game played in a good spirit until the 16th when the ladies tried to take out John Paterson with one of their trolleys! Luckily he was saved by the ditch. All square at the end for an honourable half.

After the golf both ladies and gentlemen enjoyed a superb meal and the banter and laughter in the dining room demonstrated how successful this event has become.

You would like to thank our match manager David Andow for his efforts and organisation.