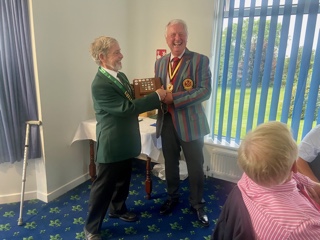 Taunton & Pickeridge Golf Club was the venue for the home match between Somerset Golf Captains and Wiltshire Golf Captains on the 26th of July 2021. The match was played in very good conditions with sunny and bright weather and just the occasional rumble of distant thunder.

In match one, Captain of Captains Stephen Butterfield played with club captain Jacky Ford. The Wiltshire captains were good company and there was plenty of good golf and good banter in the match (but that’s enough about Frank!). The golf played by the Somerset players was too hot for Wiltshire and the teams shook hands on the 13th – with Somerset winning by 6&5.

In match two, Phil Barrett and Philip Bowden enjoyed the thoroughly good company of the Wiltshire captains. The golf was great for five holes and Somerset went four up, but then succumbed and lost by being one down.

In match three, Ben Gliddon and Nick Prince also enjoyed good company and a very friendly match. The game was nip and tuck throughout and neither team ever led by more than two holes. The match was all square after 17 and that’s how the match ended.

In match four, former T&P captain John Ford played with Tony Taylor and they enjoyed great company and good banter throughout. Somerset got away to a steady start and eventually pulled ahead on the back 9 to win 3&1.

In match five, Stuart Mann played with Rob Hirons. This was a great game on an excellent day and great company. The match was played in great spirits but Wiltshire came out victorious 2&1.

In match six, Keith Wiggins played with Murray Parsons and there were never more than two holes in this match. Everyone enjoyed the chat and the company. Somerset had to birdie the 18th to half the match.

In match seven, David Andow and Geoff Rooke enjoyed a great game which was keenly fought, but which went Somerset’s way between the 11th and 14th. Very good company and a 3&2 win for Somerset.

In match eight, Rob Hardy, Glyn Sewell and their Wiltshire opponents played some good golf and shared some enjoyable banter throughout. A little bit of local knowledge made the difference and Somerset enjoyed the victory by the margin of 5&3.

And so when all eight matches were completed, the final score was Somerset 5 Wiltshire 3 :  and Somerset retained the trophy which they won at Oake Manor in 2019.

Both teams enjoyed a delicious two course meal and both Captains made entertaining speeches before the presentation of the trophy.

We would like to thank the match managers of Iain Robertson and David Andow for everything they did in organising this match.