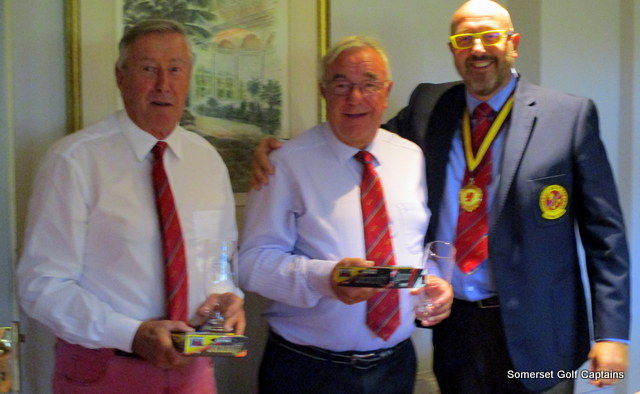 The end of the season for Somerset Golf Captains was celebrated in fine style at Long Sutton Golf Club, on Thursday 13th September.

The weather was perfect for golf and the course benefiting from the mid week rain, offered itself well, considering the long dry spell and the resulting significant cracks in many places.

Long Sutton is considered a tricky course because it demands acute judgement of distance to navigate the multiple ditches across the course. This was reflected in the scoring being fairly low and the scores of the 60 players mostly tightly bunched.

The Committee were delighted not only with the numbers who turned out but also that there were a good few new faces who were most welcome and who are hoped to become regulars.

In the new arrangement, the entrants had the option to pre-enter as nominated pairs.

The day has the added bonus that the winner of the Griffith Cup would be announced – the golfer with the best combined score over the Spring and Autumn meetings.

Our Secretary, Jim Scott ran a very efficient day and passed the scores to the President to announce and the Skipper to present.

Opening the prize giving, President Mike Usher-Clark to the approval of all, thanked Jim Scott for his organisation

Finally, Mike reflected on a good golfing season, and the increased numbers playing in the general meetings with the new arrangements.

He also mention that the Committee thanked those players who although not originally selected, were prepared to turn out to fill very late withdrawals from our match teams. It had been questioned that they played a lot, and the reason needed to be understood.

He then praised the energy and commitment showed by the 2018 skipper Andy Carter and the room showed their appreciation.

In response, Andy expressed his gratitude for the support he had enjoyed, thanked the Committee and hoped to see everyone at the Annual Diner at Taunton Rugby Club, on February 1st 2019.